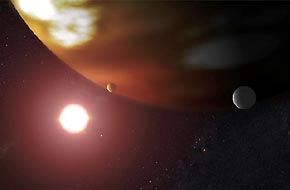 An artist's conception of one of the two giant planets orbiting the red-dwarf star Gliese 876. The other is the tiny dot close to the star.

(The term "red" is something of a misnomer for most red stars; though redder and dimmer than the Sun, they still have temperatures and surface brightnesses great enough to make them appear as dazzlingly white as a light-bulb filament to anyone seeing them up close — as the artist has correctly shown.)

Journalists make science look too easy. Plan an experiment, carry it out, get a reportable result. Maybe even an exciting result. Hah.

What we don't see are the countless bomb-outs, meaningless results, equipment tragedies, lost-in-the-noise data, and the wasted years, funding, and careers. If you ever wonder why scientists get wildly enthusiastic when some little thing pays off, it's because they know the alternative.

The stakes are much higher when it comes to investing big budgets in world-class scientific machinery — such as giant astronomical instruments. The professional astronomy community has gotten good in the last half century about evaluating which major projects offer the most promise for the least money, lining up behind these, and letting go of their other fond desires — with a remarkable degree of self-discipline. About every 10 years since the 1960s, American astronomers have produced a "decadal survey" spelling out the future spending projects that seem to offer the best odds.

Planets on the Far Horizon

In 2002, the decadal surveys were joined by a standing Astronomy and Astrophysics Advisory Committee that issues reports on an ongoing basis. Last May it published a report by its Exoplanet Task Force. This report examines the best strategies for discovering, studying, and understanding planets around other stars over the next 5, 10, and 15 years.

In particular, the report looks at the best ways to push the search toward finding small, low-mass planets like Earth, and for understanding "whether our home world is a common or rare outcome of cosmic evolution."

Some of the report's conclusions are no surprise. For instance: refine the precision of planet-hunting spectrographs so they can measure star wobbles as slight as mere centimeters per second. This seems technically doable, and some stars seem to have radial-velocity profiles clean enough that such an engineering investment won't go to waste.

Other recommendations may seem unexpected. For instance, a big, specialized microlensing survey (looking for background stars being temporarily magnified by the gravity of random foreground planets) ought to be so productive (see Sky & Telescope: July 2007, page 18) that a modest, 2-meter telescope should be dedicated to this effort right away. 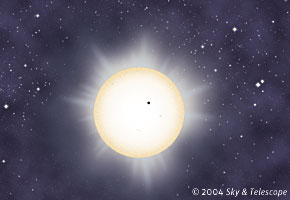 Just last week, a new argument entered the fray. Planet hunter David Charbonneau (Harvard-Smithsonian Center for Astrophysics) says we could tell a lot about small planets' atmospheres — even finding possible out-of-equilibrium gases that would indicate life — by doing spectral analysis of planet silhouettes transiting their stars. If this is so (it is disputed), it would undercut the need for the long-envisioned, but very expensive, Terrestrial Planet Finder orbiter to image small planets directly. Here's Charbonneau's paper.

A snip from the Exoplanet Task Force report:

More careful journalism would disclose that the AAAC has not "replaced" the Decadal Surveys. Decadal Surveys are conducted by the National Academy of Sciences at the request of relevant funding agencies (NASA, NSF, DoE). One for astronomy and astrophysics in the next decade is in the process of being formulated now. The AAAC is a standing committee mandated by Congress, administered by NSF, funded by NSF and NASA.

Also, the transit spectroscopy method advocated and practices by Charbonneau, Swain and others, is an exciting new method that is producing excellent results...on giant planets. Calculations by Kaltenneger, Traub, Jucks (to be published in APJ) show that even a 16m telescope would be insufficient to obtain useful results on an earth-like planet. TPF-scale missions remain needed to study earth-like exoplanets.