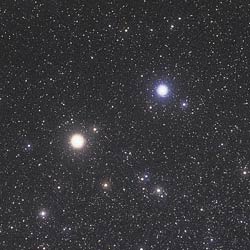 Astronomers have found an extrasolar planet orbiting Pollux (bright yellow star at left), the 16th brightest star in the night sky. It's the brightest star visible from Earth that is known to host a world outside of our solar system.

Astronomers have discovered more than 200 extrasolar planets — and nearly every one orbits an obscure star with a forgettable name. But finally astronomers have found a planet around a bright, familiar star dear to the hearts of amateurs worldwide: Pollux. The 1st magnitude star is one of the brightest stars in the sky and one of the famous "twin" stars in the constellation Gemini.

Two independent groups, led by Sabine Reffert (Heidelberg-Königstuhl State Observatory, Germany) and Artie Hatzes (Thuringia State Observatory, Germany), discovered the planet using the Doppler technique. The planet has a minimum mass of 2.9 Jupiters and orbits Pollux in a 590-day, nearly circular orbit. "What a wonderful gift that anyone, even in the center of a city, can gaze up and see a star that has a planet," says Geoff Marcy (University of California, Berkeley), a member of Reffert's group. Marcy's group has also recently announced the discovery of five new exoplanets.

In other extrasolar-planet news The European group led by Michel Mayor (Geneva Observatory, Switzerland) has found the second four-planet system around another solar-type star. The four planets orbit Mu Arae (HD 160691), a G3 star 50 light-years from Earth. Two planets were previously known to orbit this star, but analysis of additional data reveals two new planets and gives a better orbital solution for all four. The planets orbit at distances of 0.09, 0.92, 1.5, and 5.2 astronomical units and have minimum masses of 0.03, 0.5, 1.7, and 1.8 Jupiters, respectively. Previously known four-planet systems exist around the solar-type star 55 Cancri and the pulsar B1257+12. The outer Mu Arae planet, which has an orbital period of about 11½ years, is the closest Jupiter analog yet found outside the solar system.