“Star cities” orbiting galaxies may reveal the mass of the gargantuan black hole hidden deep in the galaxy’s heart. The new relation could be more evidence for a large-scale black hole-galaxy link — or, it could mean one of the latest revolutions in astrophysics isn’t the full story. 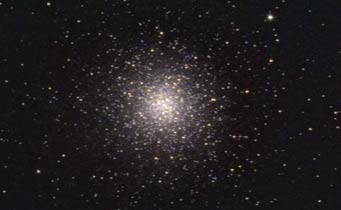 The globular cluster M3 is one of dozens (perhaps hundreds) of globular clusters orbiting the Milky Way. Observations of such clusters may indirectly "weigh" the black hole in a galaxy's heart. John Graham contributed this composite image to our online gallery.

In the last couple of decades astronomers have found strange correlations between galaxies and the supermassive black holes in their cores. These apparent relationships have mostly been between the black hole’s mass and the galaxy’s bulge, the spheroidal concentration of stars at a galaxy’s center. But in the last couple of years astronomers have seen hints farther out in the galactic halo — namely, a galaxy with a larger central beast will have more globular clusters.

The duo looked at 13 galaxies with known black hole masses and globular cluster velocity dispersions, including our own Milky Way. The results plot a line similar to that drawn by the strongest case for a black hole-galaxy link, the so-called M-sigma relation. “Sigma” is the Greek letter used as a symbol for velocity dispersion, but in the M-sigma case the velocity range is for stars in the bulge, not globulars. The M-sigma stars are also not the same stars that whiz closely around the invisible leviathan, revealing its presence. They are hundreds of light-years farther out.

This M-sigma connection is beyond weird. Black holes have no right to have any apparent influence on stars that distant. Along with the other odd relations found since Doug Richstone and Alan Dressler announced the first one in 1987, M-sigma provided the fodder for a revolution in astrophysics, the idea that feedback between black holes and galaxies could closely couple their evolution. That was ludicrous: a black hole affecting an entire galaxy is like a single atomic nucleus controlling a 30-story building.

Globular clusters are even farther out, orbiting thousands of light-years from the black hole in the galaxy’s halo. A relation between them and the central black hole is equally farfetched (if not more so). The connection is probably not direct, explains Katherine Rhode (Indiana University). Instead, her work suggests the tightest correlation is between the clusters and the galaxy’s total stellar mass.

Sadoun and Colin suggest that globulars on eccentric orbits could pass close to the galaxy’s center, allowing for effects on the clusters’ velocity dispersions. Still, the change is minor. It’s also possible, they note, that the coupled growth could be a red herring. In recent years a few astronomers have suggested that galaxy mergers over time could build up galaxies and black holes in such a way that it would look like the two were coupled, when in fact they aren’t. This idea is highly controversial — one of the astronomers who has raised it admits he lost sleep due to his excitement and angst when first proposing the idea — and for now there’s no consensus on what role mergers could play in the black hole-galaxy story.

Really, just how “weird” is proportional mass distribution in galaxies? Shouldn’t the size of the anchor be proportional to the size of the ship? Or to use another analogy, have you ever seen a big city with a small city hall? Distant effects can easily share the same cause if the cause is large enough. Couldn’t the super-massive black hole size and the number of globular clusters both be functions of the overall mass available to form the galaxy?

Was thinking the same thing.

Thanks Peter, that means a lot to me. Do you think your duality theory could be working on the single galaxy scale as well? For example, by helping to keep the globular clusters at their average distance from the galactic center even though you'd think that they'd loose orbital energy with each pass thru the denser disk and bulge? Just an idea I had while trying to think like Newton.