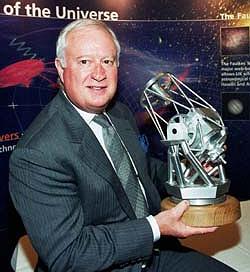 A man with a vision. British entrepreneur Dill Faulkes holds a scale model of one of the twin 2-meter-aperture telescopes his educational trust helped fund. Through the Faulkes Telescopes Project, UK schoolchildren now have access to professional-grade robotic telescopes.

Last March 16th the IMAX Theatre of London's Science Museum provided the venue for the launch of the Faulkes Telescope Project (FTP). Hundreds of schoolchildren, their teachers, and astronomers were on hand to celebrate the generosity and vision of British entrepreneur Dill Faulkes, whose educational trust provided $18 million to fund the construction of two research-grade telescopes that will be available to schools for real-time robotic observing.

The first telescope, Faulkes North, is located on the mountain of Haleakala on Maui, at the University of Hawaii's High-Altitude Observatory. This instrument saw first light on August 7, 2003, and is now fully operational. Faulkes South is situated at Siding Spring, near Coonabarabran in New South Wales, Australia, at an existing observatory run by the Australian National University. It will come online soon. Given the difference in time zones, schoolchildren in the UK will be able to use the telescopes during daytime classroom hours. 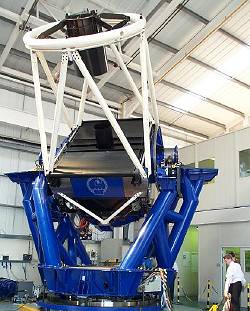 The first instrument to come online is Faulkes North, shown here being tested prior to its shipment to Hawaii in August 2002. Like its Southern Hemisphere twin, this telescope has a primary mirror 2 meters in diameter. Click on the image to see the the instrument installed in its clamshell enclosure.

The twin scopes were built by UK-based Telescope Technologies Ltd., a subsidiary of Liverpool John Moores University. Each instrument has a 2-meter-diameter primary mirror and is mounted in an altazimuth configuration. Both scopes are equipped with 2,024-by-2,024-pixel CCD detectors that give a 4.6-arcminute-wide field of view, though a maximum field 30 arcminutes across is possible.

Each telescope system and its state-of-the-art clamshell enclosure is designed to operate automatically. A control center in the UK (and others in Hawaii and Australia) sends instructions via the Internet on which object to observe. The telescope-control system then decides if the weather is good enough to open the enclosure, point the telescope, take the image(s) requested, and move on to the next queued observation. At the end of night, or if the weather deteriorates, the system shuts the enclosure.

One of the highlights of the FTP's inauguration was a live demonstration of the system's capabilities by project director Paul Roche. Fortunately, the weather in Hawaii was clear, and guests were able to download images of the galaxies M51 and M82 as well as the globular star cluster M3. During his talk, Roche explained how students have a genuine opportunity to do cutting-edge science with the telescopes.

"The idea of giving British youngsters access to a world-class telescope immediately appealed to me," says Faulkes. "I could see that spending a few million pounds making science and maths in schools more interesting would have much more effect on children than spending half a billion on truancy measures." 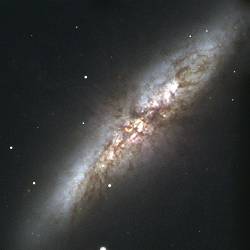 One of the highlights of the Faulkes Telescope Project's launch was a live demonstration of Faulkes North by project director Paul Roche. This image of M82 was obtained via the Internet after commands had been sent to the robotic telescope in Maui.

Many of those assembled for the launch ceremony were impressed by how easy it was to use the system. Once logged in, students could use a star chart to see what objects were available to them, point at an interesting bit of sky, or type in the name of a target they wished to see. Users were even shown a live infrared webcam video of the telescope swinging to the desired position.

Further details on the FTP are available at www.faulkes-telescope.com. It is intended that other groups, such as astronomical societies, youth clubs, and adult learning groups, will also be able to use the telescopes outside school hours.