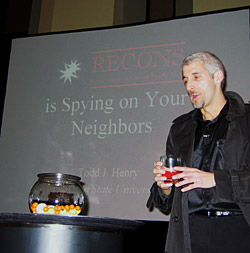 Todd Henry adds a batch of red dwarfs into the mix of the Sun's neighbor stars for an audience at the American Astronomical Society meeting in Atlanta last week.

Some tourists travel all over the world but never visit their hometown museum. Likewise, many astronomers reach out to the edge of the observable universe without knowing their immediate neighborhood. But not Todd J. Henry of Georgia State University. Henry doesn't care about galaxy clusters, quasars, and the microwave background. Instead, he wants to know everything about the Sun's immediate galactic surroundings. His REsearch Consortium On Nearby Stars (RECONS) has a simple and straightforward goal: to find and characterize each and every object within 10 parsecs (32.6 light-years) of the Sun. "This is the only way of getting an unbiased census of the stellar makeup of the universe," he says.

When RECONS started 10 years ago, the number of known stellar systems (both single and multiple stars) within 10 parsecs stood at around 200. Now it's 246, with an individual-object count of 344 — including 20 white dwarfs, 9 brown dwarfs, and 3 extrasolar planets.

Over the past four years alone, the number of known nearby stars has increased 9 percent, mainly due to a dedicated program (sponsored by NASA and the National Optical Astronomy Observatory) to measure parallaxes with a relatively small telescope at the Cerro Tololo InterAmerican Observatory in Chile. "We spend some 100 nights per year on follow-up observations of candidate objects," says Henry. Still, he adds, "we have more stars thrown at us than we can handle."

The RECONS astronomers winnow candidate stars — mainly red dwarfs — out of huge stellar databases such as the Two Micron All Sky Survey (2MASS) and the Sloan Digital Sky Survey (SDSS), or even from images taken for near-Earth asteroid hunts. In some cases candidates are selected on the basis of their colors, often in the infrared. In other cases they are spotted by their unusually high proper motion (long-term motion on the sky). But the only way to make sure that a star belongs in the RECONS catalog is to measure its trigonometric parallax, which has to be larger than 0.1 arcsecond to meet the distance criterion of closer than 10 parsecs. 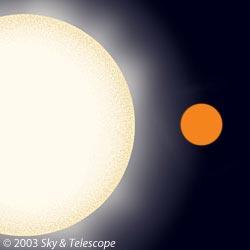 The most recent additions to the list of near neighbors include SO 0253+1652, "Teegarden's Star," a type-M6.5 red dwarf just 3.82 parsecs (12.4 light-years) away in Aries. At visual magnitude 15.4, it is barely within reach of large amateur instruments. It has a proper motion of more than 5 arcseconds per year and ranks as the 23rd closest star system to the Sun.

The most surprising result of RECONS so far, according to Henry, is the realization of the extent to which red dwarfs are the real rulers of the universe, both in numbers and total mass. Within 10 parsecs of the Sun there are no hot, bright O and B stars, just 4 white A stars and 6 yellow-white F stars, 21 G stars similar to our Sun, 45 orange K dwarfs — and a whopping 236 cool, orange-red M dwarfs like Proxima Centauri (which still ranks as the Sun's closest neighbor). There are also 20 white dwarfs.

That means that for every other star in the universe, there are no less than 2.5 red M dwarfs. Moreover, says Henry, "Red dwarfs contain at least 40 percent of the total stellar mass in our galaxy." His team arrived at that conclusion by converting the measured brightnesses into masses, using a mass-luminosity relationship that has been calibrated quite accurately from measurements of red dwarfs in binary systems (where stars' masses can be determined directly, from their orbits). 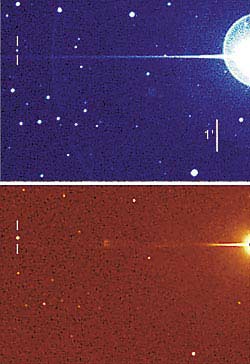 The nearest brown dwarf (between the ticks) is recently discovered Epsilon Indi B, a faint fellow traveler accompanying the naked-eye Sunlike star Epsilon Indi A (off the right edge). Note the companion's position between the background stars directly above and below it; slight motion is visible in the two years between when these two infrared images were taken. In 2003 Epsilon Indi B was resolved into a close pair of dwarfs having spectral types T1 and T6, just 0.7 arcsecond apart.

What about still cooler and dimmer objects, the dwarfs of spectral types L and T? Most of these are substellar brown dwarfs, objects with too little mass to ignite the nuclear fusion reactions that make normal stars shine. So far, only nine L and T dwarfs are known within 10 parsecs of the Sun, but Henry suspects that their real number is much higher, "although I don't think they are as numerous as red dwarfs." But he admits that, in fact, no one has any theoretically solid idea about what numbers to expect. "It's a can of worms," he says. "It bothers me enormously." In any case, it's quite possible that an L or T dwarf (or even a very faint M dwarf) lurks closer than Proxima Centauri, still awaiting detection by neighborhood spies like Henry.

RECONS's next ten years look bright. One goal is to find the best target stars where future instruments such as the Space Interferometry Mission and the Terrestrial Planet Finder might be able to detect Earthlike planets. "The habitable zone around a red dwarf is much thinner than around a Sunlike star," says Henry, "but since their number is so much larger, I believe that the first exo-Earth will be found around a nearby red dwarf. We may well help to answer the question about life elsewhere in the universe."