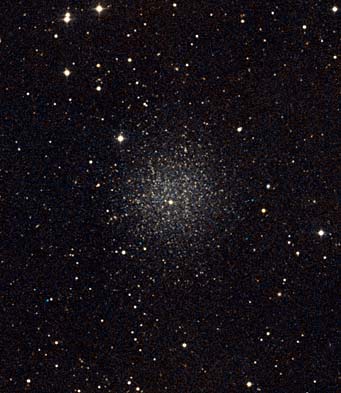 Some dwarf galaxies are much brighter and richer in ordinary matter than others. Leo II, discovered in 1950, is in range of amateur sky imagers.

Scientists announced this morning (press release) that they have apparently solved a major cosmic puzzle: the discrepancy between the number of small, faint galaxies predicted to exist near the Milky Way and the number actually seen.

By data-mining the Sloan Digital Sky Survey, and then following up with the Keck Observatory in Hawaii, the astronomers have identified many extremely dim, dark-matter-dominated dwarf galaxies in the Milky Way's immediate neighborhood. This is a major step toward resolving the "missing dwarf galaxy" problem — the last important puzzle-piece that was lacking from the picture of the how the entire universe took form during and after the Big Bang.

Cosmology theory predicts that, if the inflationary-universe version of the Big Bang's earliest instant is correct, a large galaxy like the Milky Way should end up with a couple hundred dwarf-galaxy satellites. But only a dozen or so were known. Now it's clear that most or all of the missing galaxies do indeed exist, but they were overlooked because they are made of 99% dark matter and relatively few stars.

The full story of today's announcement and its significance is in the October issue of Sky & Telescope, on sale now.