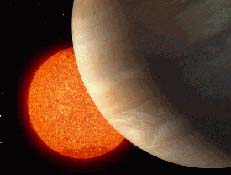 An artist's concept of a Jupiter-like planet eclipsing the giant star Iota Draconis, which is 13 times larger than the Sun.

About 80 planets are known to orbit main-sequence stars that are more or less like the Sun — ranging from spectral type F (a little hotter and larger than the Sun) to M (quite a bit cooler and smaller). Now astronomers have extended the range of star types that have planets. At today's AAS meeting in Washington D.C., Sabine Frink (University of California, San Diego) and several colleagues announced finding a planet-mass body orbiting an orange giant — an old star that has used up most of its hydrogen fuel and swollen to huge proportions, as our Sun will do in about 7 billion years.

The star is Iota Draconis, shining brightly at 3rd magnitude from 100 light-years away in the constellation Draco. It's a run-of-the-mill giant (spectral type K2 III) with 13 times the Sun's diameter, though it probably has only 1.05 times the Sun's mass. Its newfound companion has at least 8.6 Jupiter masses and probably somewhat more. The object swoops around the star every 1.5 years in a highly elongated orbit (eccentricity 0.7).

"Until now, it was not known if planets existed around giant stars," said Frink in a press statement. "This provides the first evidence that planets at Earthlike distances can survive the evolution of their host star into a giant." If the star keeps expanding, however, it could still engulf and vaporize the planet in the distant future.

The planet of Iota Draconis has a very elongated orbit that is a little larger than Earth's.

The discovery came by accident. The astronomers were making Doppler-shift measurements of Iota Draconis as part of a project to reconnoiter reference stars for NASA's Space Interferometry Mission (SIM), scheduled to launch in 2009. The star showed noticeable changes in its radial (line-of-sight) velocity. That isn't surprising for a giant — they often pulse at least slightly, mimicking planet-induced wobbles, which is why extrasolar planet hunters have generally avoided them. But in this case the "pulses" in radial velocity traced out a telltale pattern indicating an object following Newton's laws of gravity in a strongly elongated orbit.

Can We Explain the Curious Case of Tabby's Star?