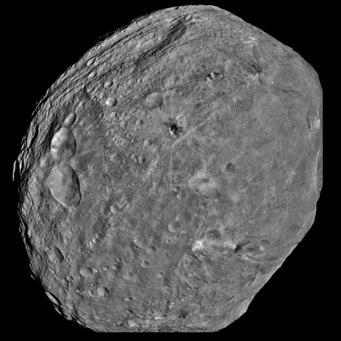 During August, NASA’s Dawn spacecraft orbited the giant asteroid 4 Vesta at a height of 1,700 miles (2,750 km) and sent home exciting images and other observations of this alien world. This Monday, Dawn’s team of scientists revealed the mission’s first results at a joint meeting of the European Planetary Science Congress and the American Astronomical Society’s Division of Planetary Sciences in Nantes, France.

The mission’s principle investigator, Christopher Russell (University of California in Los Angeles) said he has begun to think of Vesta as “the smallest terrestrial planet” because of its many features indicating past active geology, including lava flows, giant ridges, valleys, and mountains. The asteroid shows clear evidence of having differentiated quite early into a crust, mantle, and — surprisingly — a small iron core that’s been detected by Dawn’s gravity-field measurements.

Russell said that the team has recalculated the rotational axis of the asteroid since Dawn’s arrival. Establishing a reliable coordinate system is essential for mapping Vesta’s many features, but the old coordinate system was 10° off. 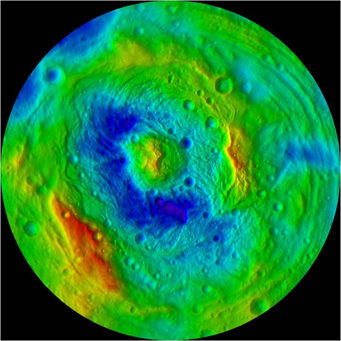 A giant impact basin near the south pole, which had been seen previously in Hubble Space telescope images, has been named Rheasilvia after the mother of Romulus and Remus, the mythic twin founders of ancient Rome. Rhea Silvia was also the mother of the Vestal virgins, priestesses in the temple of Vesta, the Roman goddess of hearth and home. Other features on Vesta will be named after related mythological characters.

Carol Raymond (Jet Propulsion Laboratory), Dawn’s deputy principle investigator, unveiled a color-coded topography map that emphasizes the highest peaks and steep slopes in the Rheasilvia basin. The large, broad mountain in its center (perhaps related to the basin’s formation) is thought to be the second tallest in the solar system, after Olympus Mons on Mars.

Raymond also discussed the geologic dichotomy between Vesta’s heavily cratered northern hemisphere and smoother areas in the south, the two halves separated by a set of grooves that gird the equator. A crater count shows that the southern hemisphere seems at least one billion years younger, almost certainly influenced (if not caused outright) by the formation of Rheasilvia. Raymond notes that further studies should reveal the reasons for these evolutionary gaps. 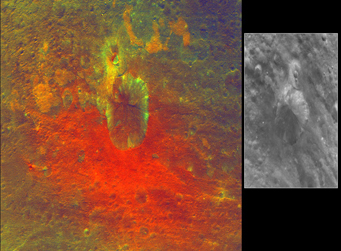 Craters on Vesta shown in false color (left image) and clear filter (right image) of the FC. A color feature associated with the ejecta south of the main crater is one of the most prominent color features on Vestaâ€™s surface

Andreas Nathues (Max Planck Institute, Germany) displayed images that had been generated using the seven color filters in the framing camera aboard Dawn. One of these reveals a large impact crater about 25 miles (40 km) in diameter. In a false-color image, a bright red zone borders the crater’s southern lip, which Nathues suggests might be loosely packed material excavated during a low-angle impact.

More generally, Dawn’s Visible and Infrared Mapping Spectrometer (VIR data) shows that Vesta has a varied mineral composition at its equatorial regions. Maria Cristina De Sanctis (National Institute of Astrophysics, Italy) says that combining thermal and other measurements will in time help unravel the nature and evolution of the asteroid’s surface.

The mineral composition of the asteroid will also help solve the origin of three rare meteorite types, classified as howardites, eucrites, and diogenites, whose igneous nature and spectra are a close match to Vesta’s. De Sanctis thinks that there is already enough spectroscopic evidence to suggest that howardites originated on Vesta, but closer observations will be necessary to make that claim for the other two types.

The Dawn team will not have to wait long for even-better peeks at Vesta. The spacecraft reached a new, closer vantage, called the High Altitude Mapping Orbit (HAMO), last Thursday. The craft now orbits Vesta every 12 hours and returns data every time it faces Earth. Dawn will remain in this orbit for 30 days, charting the surface topography, studying the asteroid’s composition, and refining measurements of its gravity.

Isn't this phrase missing a word where the parentheses are: "combining thermal and () measurements"?

An interesting article. But please review the difference between "principle" and "principal". Strunk & White's "Elements of Style" is a great reference for commonly misused or interchanged words.

Thanks for this Dawn update. Researching the asteroids will show us a wide range of processing - accounting for all stages will tell us a lot about Solar System formation. And during the next century, I hope the same research will reveal resource deposits and suitable living places for some of our descendants.