Among the first discoveries that was made with the telescope about 400 years ago was the rotation of the Sun. Galileo tracked the motions of sunspots by making careful daily drawings; these enabled him to prove that the spots are on the surface of the Sun itself, that the Sun rotates roughly once a month, and that the Sun's equator is closely in line with the ecliptic, the plane of the solar system. 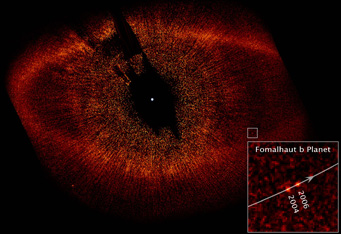 Fomalhaut's debris disk, and the planet just inside its inner edge, are both seen in this Hubble Space Telescope image. The inset shows the planet's orbital motion during two years. The radial streaks are artifacts of scattered light, and an occulting mask hides the central star. A dot marks the star's location. Click image for larger view.

This last fact later became crucial to working out theories of how the solar system formed. The Sun's equator lies with in a mere 1° of the solar system's overall plane. This is true even though the planets (mainly Jupiter) carry most of the solar system's angular momentum (rotational inertia), while the Sun has most of the mass. Such a setup falls naturally into place from the physics of a gas-and-dust cloud collapsing due to its own gravity while necessarily conserving angular momentum as it shrinks. This is how all stars and planetary systems form — as best we know.

So we would expect other stars to have spins aligned with their planetary systems, if they have planets at all. Unless something goes strangely wrong, as for all we know it might.

Now a group of European astronomers has used cutting-edge long-baseline interferometry, combined with spectroscopy, to determine the rotation axis of the 1st-magnitude star Fomalhaut. Fomalhaut, just 25 light-years away, is ringed by a Kuiper-Belt-like disk of dust and rubble about 140 astronomical units out from the star. This is about three times the Kuiper Belt's distance from the Sun. And last year astronomers found a barely detectable planet orbiting just inside the disk's inner edge.

The European team was able to measure separately the radial velocities of different parts of Fomalhaut's rotating surface. This allowed the group to determine the star's axis of rotation quite accurately. They find that Fomalhaut's equator lines up with the far-out disk to within the measurement uncertainty of just 3°. This the first time such an alignment has been measured so well for any star other than the Sun.

So, chalk up another one for planet-formation theory. In many ways, we're getting this picture very well worked out.