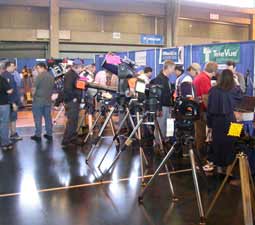 As one would expect, telescopes were plentiful at this year's Northeast Astronomy Forum & Telescope Show.

In his 19th-century poem "Locksley Hall," Alfred Lord Tennyson reminds us "in the spring a young man's fancy lightly turns to thoughts of love." Tennyson might have felt differently, however, had he been keeping company with today's amateur astronomers in the northeastern United States. For it is here that the first warm days of spring bring thoughts of the Northeast Astronomy Forum & Telescope Show. NEAF, for short, is now in its 13th year and has grown to become one of the largest astronomy gatherings in North America. Hosted by New York's Rockland Astronomy Club and Sky & Telescope, this year's event attracted a record number of attendees — an upward of 3,000 people came to Suffern, New York, on April 17–18 to hear lectures, attend workshops, observe the Sun, talk shop, and, of course, examine products displayed by more than 70 vendors.

NEAF caters to all levels of amateur astronomy, with an increasing emphasis on astronomy as a family activity. Sky & Telescope senior editor Joshua Roth held well-attended free workshops on Saturday and Sunday aimed at introducing astronomy to beginners of all ages. Other workshops by noted authorities Jerry Lodriguss and Richard Berry presented more-advanced material on CCD imaging and processing astronomical images, respectively. 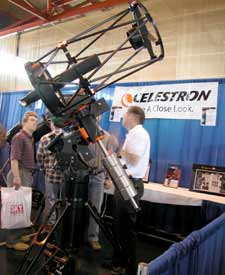 One of the biggest attractions among the vendor exhibits at this year's Northeast Astronomy Forum & Telescope Show was a prototype of Celestron’s 20-inch modified Dall-Kirkham reflector and massive computer-controlled German equatorial mount designed for advanced imaging applications.

Lectures were enlightening and diverse, ranging from Barbara Wilson's talk about observing faint deep-sky objects with large amateur telescopes, to Carolyn Porco's coverage of the Cassini spacecraft mission to Saturn, and Sun Kwok's lecture on the astronomy of planetary nebulae.

Exhibits are always a NEAF highlight, and this year was no exception. For do-it-yourselfers there was a demonstration of mirror grinding and telescope making by members of Vermont’s Springfield Telescope Makers. There were also numerous vendors selling telescope making supplies and equipment, perhaps signaling a revival of this venerable facet of the hobby, which has waxed and waned several times during the past century.