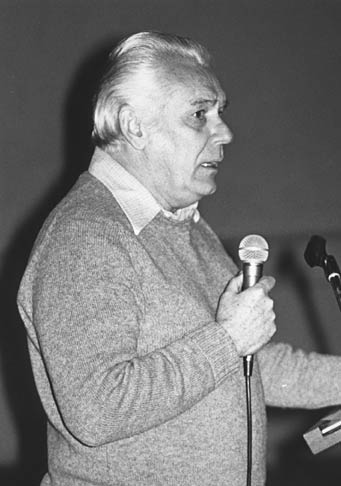 Fred Hess lecturing at an Astronomy Day gathering in 1979.

Dr. Fred C. Hess, legendary astronomer and popular lecturer at New York's Hayden Planetarium, passed away on December 13th after a three-year battle with cancer. He was 87 years old.

Among those of us who promote astronomy in the New York area, Fred had a status worthy of Joe DiMaggio. Let me explain with this vignette: Back in 1999 I was delivering a slide show on the Leonid meteors at the Andrus Planetarium in Yonkers, New York. In the middle of my talk I mentioned that when I was 10 years old I attended a sky show at Hayden, and the lecturer behind the console provided a dialog that literally lifted me up out of my seat. As I said those words I brought up a slide of Dr. Hess, and before I could name him or say anything else, the entire audience applauded spontaneously.

They obviously were among his disciples.

The next day I called Fred and told him that if Joe DiMaggio was baseball's greatest living ballplayer, then certainly — so far as the general public was concerned — he was the greatest living planetarium astronomer.

Fred Hess was the "evangelist of astronomy" and the dean of New York amateur stargazers. His title at Hayden was Instructor of Astronomy and Navigation, though he was well versed in all aspects of science. He was a longtime professor of physical science at SUNY Maritime College and authored a very popular book, Chemistry Made Simple, in 1955. For four years during the late '60s and early '70s he also served as the science editor and on-camera weathercaster for WPIX Channel 11.

And as a testimony to his abilities as a lecturer, in 1975 he received the prestigious SUNY Chancellor's Award for Excellence in Teaching.

Nobody ever fell asleep at a Fred Hess lecture. Some of his presentations were not so much lectures as stem-winding sermons. He was one of the most dynamic and powerful speakers you would ever hear.

It wasn't only Fred's resonant voice that made him a popular raconteur. I once asked him for his secret on how he was always able to hold an audience. He answered, "Just tell a story."

He sometimes recalled how, in 1814, the night assistant at Sicily's Palermo Observatory quietly entered two strange star names, Sualocin and Rotanev (for adjacent stars in Delphinus), into the observatory's star catalog. Not until the names had been considered official for many years did someone realize the joke: they were the night assistant's first and last names spelled backward! So Fred chose two adjacent stars and named one "Derf" (Fred backward) and the other "Bob," for his friend astrophotographer Robert Little, whose name is Bob spelled backward.

Then there was the one about the constellation Lyra, the Lyre. Fred explained that a lyre was a small harp that, hundreds of years ago, young men strummed while courting dewy-eyed young ladies under the cover of darkness. Fred would remark that this custom is still practiced today. Using a homonym for his final word, he always got a huge pop from his audience by stating, "I'm sure that even as I speak to all of you tonight, at this very moment, there are countless young ladies out there, listening to liars."

Fred could take a subject and make it understandable for all ages. In 1983 he was conducting a class for 6 to 8-year olds in one of the basement classrooms of the old Hayden facility. It was a Saturday morning, and I was there to help run the outdoor solar observing in front of the planetarium. I stepped downstairs to say hello to Fred — amidst about 20 kids running and shrieking. Through the din I asked him what he planned to talk to them about, thinking it might be something along the lines of "What is the Moon?" or "How to find the North Star." "No," he said, "I'm going to talk to them about the Hertzsprung-Russell diagram." I left quickly, thinking that he had finally bitten off more than he could chew.

About a half hour later I checked back. Every child was sitting in rapt attention as Fred was bringing the class to a close. He was asking them what color a cool star would be, and every kid enthusiastically shouted back: red! He then asked what color a very hot star would be, and 20 voices yelled back: blue! He had those kids eating out of his hand.

This is perhaps the greatest tragedy of this wonderful man's passing: That so many will never have the opportunity to hear Fred's booming voice. But I've kept a small collection of audio tapes from lectures, planetarium shows, and interviews that I did with Fred for radio broadcasts.

One of these tapes, which I've just finished listening to, is a recording of a half-hour program on WPAT radio back in 1985, about Halley's Comet. The moderator asked Fred about how to pronounce the comet's name: Hay-lee or Hal-lee? Fred pointed out that the latter is correct, adding, "Hay-lee is probably derived from a certain musical group and a wonderful song-and-dance man [Jack Hailey] who played the Tin Man in The Wizard of Oz."

I immediately thought of the scene in the movie where the Tin Man receives that ridiculous, albeit beautiful, heart-shaped clock. Like me, maybe you've watched it more than a dozen times in your life. I realized that what the Wizard said to the Tin Man sums up the life of Fred Hess:

He gave so much of himself and enjoyed sharing astronomy with people of all ages. He will be sorely missed.

Joe Rao is the chief on-camera meteorologist at News 12, serving Westchester County and Hudson Valley of New York. An assiduous amateur astronomer for 40 years, and an instructor and guest lecturer at the Hayden Planetarium for 21 years, he considers Hess to be one of his mentors in astronomy.