Astronomers have determined that Supernova 1987A, a gargantuan stellar explosion that occurred hundreds of thousands of years ago, produced a massive cloud of cosmic dust, say a team of astronomers based in the United States, United Kingdom, and Europe. Their study of Supernova 1987A — which erupted within the Large Magellanic Cloud, a small satellite galaxy hovering near our own Milky Way — suggests that exploding stars might be largely responsible for the vast amounts of dust found in galaxies that formed very early in the universe. 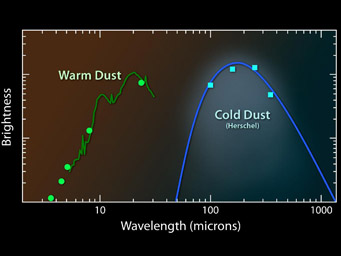 This graph depicts measurements of the cosmic dust ejected by Supernova 1987A. The X axis shows the wavelength of electromagnetic radiation (in microns), and the Y axis depicts flux density.

Observations by the European Space Agency's Herschel Space Observatory "provide the first solid evidence that the supernova produced a large amount (about half a solar mass) of dust, which is the mass predicted by theoretical works,” says Mikako Matsuura (University College London), lead author of the study. The team's results were published online in Science for July 7th.

Matsuura and other researchers gathered their data in April and August of 2010 while using Herschel to observe SN 1987A, which flared to prominence almost a quarter century ago. Although Herschel recorded the supernova's expanding shockwave as an unresolved point of infrared light, its spectrometers showed that the energy it emits fits the signature of massive clouds of relatively cool dust.

She and her colleagues base their findings on data gathered by two of Herschel’s instruments. PACS (Photodetector Array Camera and Spectrometer) sees light in wavelengths ranging from 57 to 219 microns. SPIRE (Spectral and Photometric Imaging Receiver) is able to measure the intensity of light at a particular wavelength using multiple, simultaneous measurements. 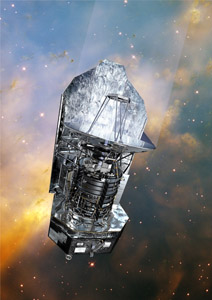 The team ruled out other possibilities for the strong infrared glow, including dust being exhaled into space by the red supergiant star that begat SN 1987A or that it represented interstellar dust being swept up by SN 1987A's rapidly expanding shock wave. They also determined that the heat signature of the dust could not stem from the interstellar medium reflecting the supernova's light.

All this cosmic dust might resemble the silicate-rich particles found in some of Earth's deserts. There is, however, an important difference — cosmic dust is much smaller. While sandy particles might be as small as 1 mm across, cosmic-dust particles typically span just 1 nanometer (10-9m). And, though these particles were warm enough to be detected by Herschel, they are still exceptionally cold: between –429° and –416° Fahrenheit (about 23 K).

Due to the LMC's proximity, just 160,000 light-years away, SN 1987A and its remnants have become "one of the most extensively studied extragalactic objects, with ground, airborne, and space observatories covering a wide range of the electromagnetic spectrum," says Matsuura.

The team’s findings help answer a long-standing question about how abundant dust accumulated billions of years ago in young galaxies. Astronomers already knew that cosmic dust can be ejected by massive stars that have reached the end of their lives. Called asymptotic giant branch (AGB) stars, these behemoths fuse heavier and heavier elements beyond the usual hydrogen and helium, causing them to pulse, "bounce around," and "dump out stuff," says Evan Scannapieco, an astrophysicist at Arizona State University. Yet, AGB stars generally develop too slowly to account for the large amount of dust observed in galaxies that formed early in the universe’s history.

"This is a puzzle," says Patrick Young, another astrophysicist at ASU. But, he adds, "If a lot of dust forms quickly and efficiently soon after the supernovae, a large dust mass is not as much of a surprise."

Herschel's observations also show that the universe contains much more cold dust than had previously been thought to exist. This dust has not been seen before "because it is cold and only emits at longer wavelengths that are nearly entirely absorbed by Earth’s atmosphere," says Edwin Bergen, an astrophysicist at the University of Michigan. "With Herschel this hidden dust was revealed and shown to be in larger quantities than expected."

For more information about Herschel's observations of SN 1987A, see the press releases here, here, and here.

I have long suspected this dust to exist in a relatively high concentration as a nova and supernova product. Since it is so difficult to observe, we had to wait for the technology to detect it. I suspect the larger the supernova star, the more is produced and the heavier elements should increase proportionally to the size of the exploding star (higher percentage of heavy elements). Even if the supernova produces a black hole, some material will still be cast off and not drawn back in. Thanks for confirming my thoughts on this matter.

I hate to be the know-it-all who posts gotchas, but in the interest of clarity you need to change the first figure's caption. The X axis is the wavelength of observed EM waves, not dust-grain size.

Well, infrared emission wavelength od dust depends on its grain size, I guess. If so, then caption is not a glitch, but indirect and that indirection should be noted below X axis.