From Venus to Gaia… and back down to Earth

If you’ve been looking west during the evening hours in recent weeks you’ve probably been enjoying Venus, shining like a brilliant diamond in the twilight sky. If you haven’t noticed it yet, be sure to watch this Friday, February 27, when Venus and the crescent moon will appear side by side. Gorgeous! 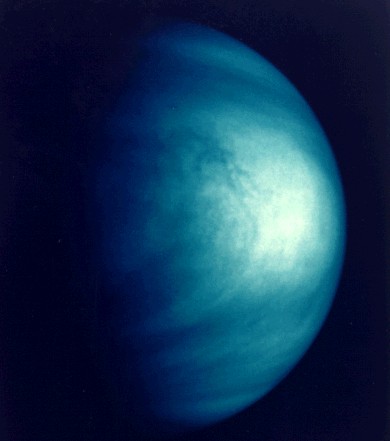 In this golden age of discovery, with the search for Earthlike planets beyond our solar system advancing rapidly, Venus offers an important case–and a caution. Although it is nearly identical in size and bulk composition to Earth, Venus is nothing like the habitable water-world where we live. Its surface resembles a toxic oven, with temperatures and pressures hot enough to melt lead. Up above, the sky is a perpetual ceiling of sulfuric acid clouds.

One of the many big differences between Earth and Venus that could have a bearing on habitability is the absence of a strong magnetic field on Venus. On Earth, the magnetic field acts as a shield, diverting charged particles from the Sun well before they reach the atmosphere. (We like that!) On Venus, recent findings by the Venus Express spacecraft suggest that solar particles are stripping the planet’s atmosphere of water.

So is it just dumb luck that we have a magnetic field and Venus doesn’t? Or is something deeper going on here?

A recent conversation with University of Toronto planetary scientist Sabine Stanley led me to thinking about the differences between Earth and Venus as magnetic bodies and what this might say about life. One thing she immediately cleared up for me is the common misconception that Venus lacks a magnetic field because of its extremely slow (243-day) rotation period. In fact, Venus is not rotating too slowly to start up a respectable magnetic field. What is missing is convection in its liquid core. The planet is not losing internal heat quickly enough to facilitate convection, and one possible reason for that is the total absence of plate tectonics at its surface. Here on Earth, the mantle convection that causes the seafloor to spread and the continents to drift does a good job of releasing heat.

So why does Venus NOT have plate tectonics? Maybe because it lacks water oceans, which are thought lubricate the process on Earth. But remember that the absence of a magnetic field on Venus may be why the planet doesn’t have oceans in the first place–which suggests a negative feedback loop.

This made me wonder if there is another link in the chain that Earth provides but Venus does not: Life.

Proponents of the Gaia hypothesis argue that life is regulating physical conditions on Earth, including temperature and ocean salinity, to keep the planet livable. It’s even been speculated by some that the presence of microbial life on Earth may have prevented the early loss of Earth’s oceans, as occurred on Venus.

So now I imagine an interesting chain: Life regulates climate, which retains oceans, which facilitates plate tectonics, which allows for a strong magnetic field in the core, which helps life. Could the Gaia hypothesis be more than skin deep?

I think it’s a beautiful notion, but it may well be wrong. Many geoscientists are skeptical about the idea that life had a role to play in retaining Earth’s oceans. As David Schwartzman of Howard University told me, an Earth with no life at all would probably still have oceans (although the planet would almost certainly be warmer).

In other words, it’s a stretch to say the presence of Earth’s magnetic field proves that life exists here. Nevertheless, the link between a magnetic field and oceans is a plausible one, so even if our field isn’t a true biosignature, it’s a likely indicator of a watery world with active geology—the kind of place that would be ideal for harboring life.

All of his may help us one day soon when we’re discovering terrestrial planets by the score and trying to separate the Earths from the Venuses. If there’s any way to remotely detect the presence of a strong magnetic field, maybe that’s the planet where we should send our space probes (and gift baskets) first.

Ivan Semeniuk is host of The Universe in Mind podcast, and science journalist in residence at the Dunlap Institute for Astronomy and Astrophysics, University of Toronto.

Not trying to get religious on everybody here, but this article has Creation and God written all over it. There is so much regulation of C02 and temperature in the oceans because of plankton life in the oceans it's just not funny. Cousteau said, basically, "kill the oceans, kill life as we know it on the planet". It is thought that the "normal atmosphere on Mars has been "burned off", along with all atmospheric and surface water, by microwaves, solar wind, it is exposed to because it's core has stalled, stopped spinning, thus it has no magnetosphere. The fine balance that makes earth special and life possible, and in so many ways is just freaky. Without a moon one third the size (and mass) of earth would make the tides so large in our oceans, that life as we know it would also be impossible, with hundred foot tides washing the continents constantly. The closer we look, the more we find out how unique planet earth really is.