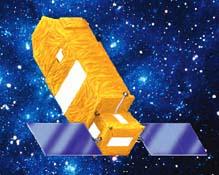 The Far Ultraviolet Spectroscopic Explorer has been in safe mode since December 10th due to a failing positioning system. Astronomers are currently engineering a fix to the problem.

Just as it began its third year of observations, NASA's
Far Ultraviolet Spectroscopic Explorer
(FUSE) went into safe mode on December 10th when the second of four
orientation-holding reaction wheels malfunctioned. The first of the
wheels went out of action on November 25th. The FUSE mission team at
NASA's Goddard Space Flight Center and Johns Hopkins University is optimistic
that new software will be written to control the pointing of the satellite
with the remaining two wheels. FUSE also has a system that uses the
Earth's magnetic field to change the craft's orientation.

The first sign of trouble came in August 2000 when a wheel
temporarily rubbed against its housing when trapped gas made the surrounding
insulation bulge. The spacecraft was down again briefly in February
2001 with a similar problem. Until a fix is ready — probably in
weeks if the wheels can be restarted, but several months if a new control
method is needed — FUSE will sit in emergency configuration with
its solar panels aimed directly at the Sun for maximum power.

FUSE was launched in June 1999 and since science operations
began the following November, the mission has been largely trouble free.
In 2001 alone, FUSE observed more than 600 different astronomical objects,
and more than 50 papers based on FUSE observations are scheduled for
presentation at the American Astronomical Society meeting next month.
Earlier this month, ancient
Martian oceans were inferred using FUSE observations.