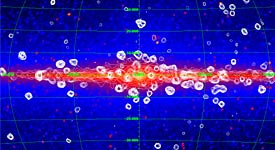 The perfect match between an X-ray image obtained by the Rossi X-ray Timing Explorer satellite (contours) and a near-infrared image of the galaxy taken by the Cosmic Background Explorer satellite (color coded) indicates that X-ray emission traces the distribution of stars. This result, in turn, suggests that the galactic X-ray background consists of a huge number of faint, individual sources rather than diffuse gas. Click on the image to view a larger version.

Thanks to NASA's Rossi X-ray Timing Explorer (RXTE) satellite, astronomers appear to have solved the long-standing mystery of what produces the diffuse glow of X-ray emission that permeates our galaxy. To the surprise of many, the background glow originates from huge numbers of white dwarfs — the dead cores of roughly solar-mass stars — and the hot outer atmospheres (coronae) of ordinary stars.

The Milky Way's X-ray background was discovered in balloon-borne and satellite experiments in the 1970s. The X-ray emission is smoothly distributed in the galactic plane, with a brightness peak toward the galactic center. Because major X-ray observatories such as Chandra and XMM-Newton were unable to resolve the background into individual objects, many astronomers assumed that the glow came from hot, diffuse interstellar gas.

But in two papers that will appear in the European journal Astronomy & Astrophysics, Mikhail Revnivtsev, Sergey Sazonov (both at Max Planck Institute for Astrophysics, Germany, and the Space Research Institute, Russia), and three colleagues show that interstellar gas can account for only a very small portion of the background. The team found a tight correlation between the X-ray background as mapped in 10 years of RXTE data and our galaxy’s near-infrared glow as mapped by NASA's Cosmic Background Explorer (COBE) satellite in the early 1990s. Since the near-infrared glow emanates from huge numbers of individual stars, the close match between the RXTE and COBE data strongly suggests that the X-ray emission also comes from stars, not diffuse gas.

"From the local population of X-ray sources (less than 300 light-years away), we see that most of the sources are accreting white dwarfs or ordinary stars in binary systems," says Revnivtsev. He and his colleagues propose that approximately a million white dwarfs and a billion normal stars can account for the X-ray background, and that previous Chandra observations had insufficient sensitivity to see them as individual sources.

The white dwarfs slowly accrete gas from close companion stars, a process that produces relatively high-energy X-rays. These binary systems are known as cataclysmic variables (CVs), since occasionally the white dwarf will collect enough matter to flare up in a tremendous explosion. Most of the lower-energy sources are probably ordinary stars in binary systems. The tidal influence of the companion maintains the star's fast rotation, which keeps its corona magnetically active so it can produce detectable levels of low-energy X-rays.

The results suggest that astronomers have underestimated the number of contributing X-ray sources by a factor of a hundred. Ironically, says Revnivtsev, astronomers in the 1970s produced estimates of the number of weak X-ray sources that were much closer to the mark than estimates that have appeared in recent papers. And the fact that the background is not due to hot gas clears up the mystery of why such hot (and therefore fast-moving) material does not escape the gravitational clutches of our home galaxy.

"I personally think the arguments of Revnivtsev and his colleagues are convincing in the overall picture," says Koji Mukai (NASA/Goddard Space Flight Center). "It is now up to the proponents of the diffuse gas origin to re-argue their case, that somehow, somewhere, Revnivtsev's group went wrong. I think that is going to be a tough job indeed." Mukai estimates that our galaxy may host up to 10 million CVs.