About a decade ago, Caltech astronomer Charles Steidel and others embarked on a mission to count faint galaxies in the early universe. That’s when the team stumbled on a surprising discovery: two giant clouds of glowing gas, larger and more massive than anything seen previously. 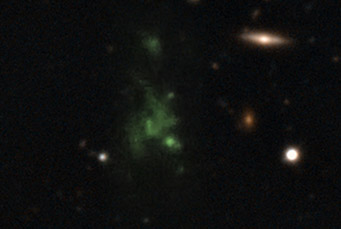 This inconspicuous green cloud is actually one of the largest known objects in the universe, the Lyman-alpha blob LAB-1. This picture is a composite of two different images taken with the FORS instrument on the Very Large Telescope: a wider image showing the surrounding galaxies and a much deeper observation of the blob itself at the center made to detect its polarization.

But what illuminates these enormous gas clouds? Unfortunately, the speculations that sprouted over the last decade spawned a debate but no real answer. While some theorists think the glow could be due to embedded galaxies, others have argued that gas filaments gravitating toward central masses of dark matter get heated and emit light.

Now, a study to be published in tomorrow’s issue of the journal Nature points in favor of the embedded-galaxy idea. Using ESO’s Very Large Telescope in Chile, Matthew Hayes (University of Toulouse), Claudia Scarlata (University of Minnesota), and Brian Siana (University of Geneva) studied the largest Lyman-alpha blob, LAB1, and postulated that an active galaxy at its heart generates the glow.

Located 11.5 billion light-years away, at a redshift of 3.1, LAB1 spans 300,000 light-years across and was one of the first blobs seen. But the three researchers noticed something new during their recent observation: photons from the lighted cloud were all polarized.

Polarization is common in nature. In fact, some sunglasses eliminate glare using this principle. Photons oscillate along three dimensions as they travel in space. When they encounter a hurdle — here, it’s gas molecules — the obstacle can orient the photons so they oscillate only in one direction.

In this study, the photons coming from LAB1 appear to be polarized in a radial pattern, which Hayes attributes to the unique geometry within the blob. The distinct polarization pattern would occur if a central source of light were bouncing off all the gas molecules. This favors a galaxy at the core. If the light were from random gas filaments, the polarization would not be so uniform.

“Observations of this gas are typically very difficult to do in astronomy,” says Hayes, “and this polarization signal provides a completely new way of measuring the properties of this gas.”

The structure of the central galaxies is still a mystery. From the large amount of observed ultraviolet light, they must house a large number of very young stars. But nothing more is known. “We are more concerned with the gas that surrounds the galaxies rather than the galaxies themselves,” Hayes explains.

This study was entirely based on visual data, and the team now plans to follow up with spectroscopic studies. While the results so far do favor a central galaxy, the scheme involving interacting gas filaments has found a lot of support in collaborative evidence. And a future study with a larger sample size might help make a stronger case one way or the other.