Astronomers are peeking into the universe's early eras using the light from galaxies that existed several hundred million years after the Big Bang. Spurred on by their success, they're embarking on a 3-year project with NASA's Hubble Space Telescope.

Have you ever noticed how kids are fascinated by stories of themselves? Particularly tales from before they can remember, such as of their birth? Astronomers are the same way with the universe. As humans we can only "remember" back thousands of years, but we want to know what came earlier — before our planet formed, before our galaxy existed. What did the early universe look like?

Galaxy research presented at the winter American Astronomical Society meeting fleshes out a picture of the cosmic history we can't remember. 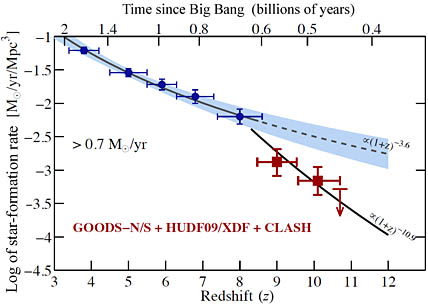 In this picture, galaxies started forming in the first couple hundred million years after the Big Bang. These galaxies weren't the pretty spirals or fat yellow ellipticals that we see today; they were small, blobby irregulars, like the Magellanic Cloud dwarf galaxies. From about 400 million years to 3 billion years (or from a redshift, z, of 12 to 2, in astrobabble), star formation ramped up in the universe. Then it tapered off. Today it's maybe one-tenth what it was in the universe's heyday.

Astronomers base this picture on observations of galaxies at various cosmic epochs. Viewing objects at great distances as a way to go backward in time, they have identified about 1,000 galaxies that emerged between 1 and 1.5 billion years after the Big Bang, about 700 at 950 million years, and another 700 between 650 and 800 million years. But they only have about two dozen before that. 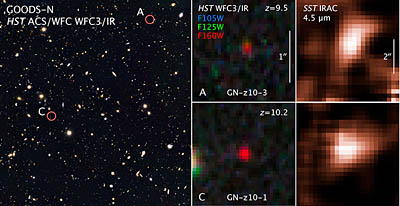 A portion of a deep Hubble Space Telescope survey called GOODS North (Great Observatories Origins Deep Survey) reveals unusually red objects (circled) as they existed just 500 million years after the Big Bang. They're shown enlarged at right as seen by HST and as recorded at infrared wavelengths by the Spitzer Space Telescope. Click here for a larger version.

Among those rare gems are four bright galaxies Garth Illingworth (University of California, Santa Cruz) and colleagues studied using the Hubble and Spitzer space telescopes. The light from this foursome was emitted 500 million years after the Big Bang. The galaxies are oddballs in that they're 10 to 20 times brighter than previous galaxies detected in this era. While theory predicts such objects should exist, the researchers were so surprised by the detections that they wondered if they were doing something wrong, Illingworth said during a press conference on January 7th.

Using the infrared capabilities of Spitzer, the astronomers could study the galaxies' light output more carefully and estimate their masses. They determined that these objects have on the order of a billion solar masses' worth of stars, on par with a recently discovered star-forming galaxy that existed about 200 million years later.

But most galaxies at early times were fainter than these. In the past few years, astronomers have begun to realize that these fainter galaxies were the primary source of the ultraviolet radiation in the universe during the first several hundred million years — radiation that ionized the ubiquitous neutral hydrogen in the so-called era of reionization.

These galaxies are, naturally, challenging to spot. To do it, astronomers use a sneaky trick known as gravitational lensing, in which the gravitational force of a closer, massive object bends and concentrates the light from a more distant object around the nearer object, just as a glass lens bends light to a focus.

As Anahita Alavi (University of California, Riverside) reported at the AAS meeting, she and her colleagues were able to use the lensing power of galaxy cluster Abell 1689 to reveal 58 faint galaxies that shone between 3.7 and 2.8 billion years after the Big Bang. These galaxies are about 100 times fainter than those previously studied in this era, which is roughly when star-formation rates peaked. Even when magnified, the galaxies appear to be at most tens of thousands of light-years across, a tenth the Milky Way's size. Yet Alavi says it's these galaxies that account for more than 70% of the universe's star formation at the time.

Because astronomers have a fairly large census of galaxies both during this era (around redshifts of 2 and 3) and back to about 700 million years after the Big Bang, they infer that the universe's makeup didn't change dramatically during the intervening time, Illingworth said. So this same type of faint, small galaxy probably predominated all the way back to the cosmos's earliest days. 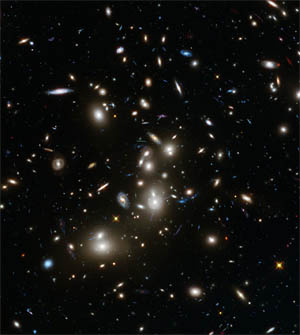 This image of Abell 2744, nicknamed Pandora's Cluster, is the first to come from Hubble's Frontier Fields observing program. This effort uses the magnifying power of such enormous galaxy clusters to peer deep into the distant universe. Click here for a larger version.

Buoyed by these results, Hubble scientists are setting out to study lensed galaxies in earnest. As Jennifer Lotz (Space Telescope Science Institute) reported at the meeting, the Frontier Fields project is a 3-year collaboration to sift out lensed galaxies surrounding "nearby" galaxy clusters in long-exposure images.

How far back Hubble can see with lensing — in theory, to 400 million years after the Big Bang — will depend on a bit of luck. Light from even earlier times has been redshifted so much by the universe's expansion that the starlight that once began as optical and ultraviolet has been stretched to infrared wavelengths. Hubble's infrared capabilities are somewhat limited, which is why astronomers want the infrared-optimized James Webb Space Telescope. If observers are already detecting the building blocks of today's galaxies with Hubble, they're optimistic that JWST will reveal the early universe in enough detail to unmask the mysteries of our cosmic infancy.

P. A. Oesch et al. "The Most Luminous z~9-10 Galaxy Candidates yet Found: The Luminosity Function, Cosmic Star-Formation Rate, and the First Mass Density Estimate at 500 Myr." Posted to arXiv.org on January 6, 2014 (version 2).

I'd never seen such a messup of intellectual discussion on the early cosmos, before--The EOR Reionization chart shows the cosmos becoming "opaque" (sic) after "~ 300 thousand", And thence calling it, "dark ages", nominally confusing it when it actually means the unproductive/nonluminous era...

And for the early universe, I think your Reviewers are yet thinking backwards--(from today backward)--instead of from the beginning forwards when the cosmic gas was still dense enough to produce exponentially-rapid supernova-chaining expanding spheroidal shells of SNR remnants shocking the surrounding lightyears of gas into rapid star-formation at 10-Myr/stage, 10 orders of α-magnitude/100 Myr, α^100/Gyr, and forming threads and knots of gas which only ultimately spawned galaxies producing a paltry 0.7-star/billion/year.

Prof Brian Cox and BBC Stargazing Live invited viewers to participate in Gravitational Lenses IDing. 50,000 viewers participated and in 3 days identified more than 7,500,000 classifications according to spacewarps.org. Their experiments continue.

Ray, I’m not sure I understand your complaint. If you examine the picture included with the article carefully, you can see the dark era in the background.

Peter, I think you’re being polite. Though you’re very bright, I doubt that you’re NOT SURE you understand Raymond’s comment. I certainly don’t.
And yes, the darkness is quite discernable. Lol.

I tried to change the Interactive Sky Chart Location & was not able to swith to trhe Southern Hemisphere. Could you please explain how toturn it on to provide different location observation.

I’m no cosmologist but I got confused by this article too. The link about the Epoch of Reionisation talks about how the formation of neutral hydrogen allowed “the thermal glow of the fireball plasma…to radiate throughout the universe unimpeded”. It then apparently contradicts itself by saying “after the Universe became neutral, it became unobservable across much of the electromagnetic spectrum”, attributing this to absorption by atomic gas.

It explains that neutral hydrogen allows light to travel freely and that the “Dark Ages” is a consequence of the lack of stars, not of the opacity of the universe.

Such a close correlation could account, for the 0.1% relation, between bulge & BH masses, in ellipsoidal galactic systems (bulges of S's, E's). Everywhere there were quasars, there was intense star-formation... generating many massive stars... in turn, generating many compact stellar remnant objects... which assumable stellar-mass BHs somehow associate, to galactic-mass SMBHs.

Note, from Figure 2.24 of "Galaxy Formation & Evolution" by Mo, Bosch, White; that GCs and super-GCs (=UCDs) dwell in a dramatically different zone of (M,L,R) space, seemingly unassociated w/ BHs, QSOs. Since GCs are the oldest star clusters in the cosmos, such might mean, that, somehow, galactic-scale systems' SF (and SMBHs) are somehow secondary... first GCs formed... then they merged and amidst many maelstroms of unknown happenings, galaxy-scale systems began developing, w/ some sort of secondary SF <----> QSOs <----> SMBHs ?

Adding to the confusion is cosmologists' use of volume in defining star-formation rate. The measure--new stars per unit volume--means nothing without knowing the volume of the universe, which is ever increasing. It is like publishing fuel economy as “miles per gallon per cylinder.” Under such a scheme, a two-cylinder Harley might show better “gas mileage” than a four-cylinder Honda that actually goes further on a gallon of gas! The volume of the universe at the left-hand-side of the graph is something like 100 times that on the RHS, making this graph of “stars per unit volume” essentially unintelligible. Sometimes I suspect cosmologist of intentionally obfuscating the subject. SFR should be solar-masses of new stars per year per trillion solar masses of existing baryons.

if so, then CO-MOVING volume, multiplied by current-epoch (z=0) density, would give the mass desired for the denominator, of Peter W's proposed ratio (and would be about 1e11 Msol).

Thanks, Erik, I’m sure they mean co-moving volume, an aptly convoluted concept. It is hydrogen that forms stars, however, not space, so volume is just a confounding factor. The natural measure is half-life. In other words, at a given rate of star-formation, half of the universe’s hydrogen will have formed stars in x amount of time, say 80 billion years. If the graph used half-life instead of the log of M_sol/yr/Mpc^3, it wouldn’t require a doctorate in cosmology to understand, and we’d know roughly how much time we have left...

So, you can convert the data from the figure, to the units of

Thus, at peak, the cosmic SFR is estimated to have been perhaps as high as 1% per Gigayear... and that was a cosmically transient SF phase. Even at maximum SFR, it would have required >100Gyr to convert all mass into stars. The current star-mass fractional density is about 1/1000 = 0.0001, comparable to the M/L ratios of the numerous dSph galaxies.