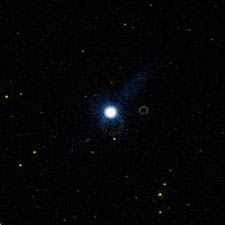 This stellar flare of a red-dwarf star in Virgo was recorded using the Galaxy Evolution Explorer satellite's ultraviolet camera. Click on image for a 1,100 kilobyte animation.

The Galaxy Evolution Explorer (GALEX) satellite inadvertently picked up an assortment of astronomical goodies in our solar neighborhood while surveying distant galaxies in ultraviolet light. The satellite's large field of view, 1.5° of sky, catches many nearby objects that unexpectedly flare and glow in this high-energy part of the spectrum. Barry Welsh (University of California, Berkeley) described some of the interesting phenomenon that turned up in GALEX's "contaminated" observations, including an exciting flare in a red-dwarf star whose brightness increased more than 10,000 times!

The unique capabilities of the GALEX cameras allow astronomers to make stellar observations on a much faster timescale than normal. Its photon counting camera can take a picture about once every 0.05 second. "We can create a movie of how a star brightens with time," says Welsh. And that's just what GALEX did. On April 20, 2004, the 13th-magnitude star, GJ 3685A, situated 45 light-years away in the constellation Virgo, erupted in a massive UV flash — brightening by 12 magnitudes in ultraviolet light. The movie, edited from about 20 minutes of data, shows that the red dwarf ignited not once, but twice. Through the events the star gave off more than one million times the energy of a typical solar flare. This flare was an extremely energetic case; most red dwarfs caught by GALEX have an average UV brightening of about 5 magnitudes. 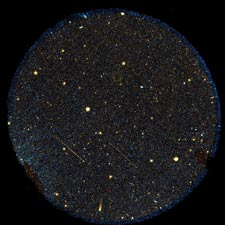 Artificial space junk whizzes closely around Earth, but we seldom see it. This movie, sped up for effect, shows multiple debris bits making their way past the detector. Several objects in this view appear to turn in their path. This effect results from GALEX's own motion as the objects orbited Earth — similar to the retrograde motion of the outer planets. Click on image for an 1.8 megabyte animation.

Asteroids, such as 204 Kallisto, have also made guest appearances in GALEX's field of view. Surface features on the 49-kilometer object were even identified. Satellites and space junk are caught crossing the path of GALEX's detector too.