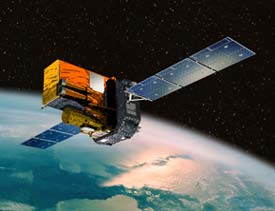 Today the European Space Agency (ESA) launched a new high-energy observatory into orbit, setting out upon one of Europe's most ambitious astronomy missions. The International Gamma-Ray Astrophysics Laboratory (Integral) lifted off from the launch facility near Tyuratam, Kazakhstan, at 10:41 a.m. local time. A Russian Proton booster placed Integral into a highly elliptical, 72-hour orbit around the Earth.

The spacecraft carries a battery of four X- and gamma-ray telescopes, as well as a 5-centimeter optical monitor. Gamma-ray photons are too energetic to focus by conventional optics, so instead astronomers use coded-mask telescopes. These employ a pattern of holes to cast gamma-ray shadows, which computer software then transforms into images.

The spacecraft's largest coded-mask telescope is IBIS, which has a 1.1-meter aperture and two imagers covering 20,000 to 10 million electron volts in photon energy. This range is comparable to that monitored by the low-energy spectrometers on NASA's defunct Compton Gamma Ray Observatory but with much improved spatial resolution (12 arcminutes). France's Sigma telescope, which flew on the Soviet Union's Granat satellite in 1989, had a similar imaging capability but was a factor of 10 less sensitive. Integral also carries SPI, a high-resolution spectrometer with a 0.7-m aperture, and JEM-X, a pair of imaging 0.53-m telescopes to detect X-rays with energies of 3,000 to 35,000 electron volts.