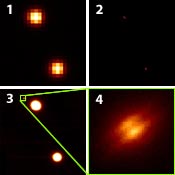 An infrared ground-based view (1) of a wide binary system in the molecular cloud MBM 12. The same view using Gemini's adaptive optics system (2) reveals that the upper star is actually a close pair. In a longer exposure of the upper, close pair (3) another faint object is resolved, a close-up of which (4) reveals an edge-on protoplanetary disk.

Last week at the American Astronomical Society meeting, Ray Jayawardhana (University of California, Berkeley) and Kevin Luhman (Harvard-Smithsonian Center for Astrophysics) announced their discovery of a never before seen edge-on protoplanetary disk surrounding one member of a nearby, two-million-year-old quadruple star system. The observations were made with both the Gemini North and Keck telescopes atop Mauna Kea in Hawaii.

The unusual quartet is located 900 light-years away in Aries within a molecular cloud called MBM 12. Its young protoplanetary disk is about three times the size of Pluto's orbit, but when originally viewed with normal ground-based telescopes it was mistaken as a part of the close pair of stars in the system. According to Jayawardhana, there is evidence that the other stars in the system have dust disks as well.

The discovery was made possible by a technology called adaptive optics, which compensates for atmospheric aberrations and results in greatly improved resolution and contrast, allowing telescopes like Gemini and Keck to see farther and more clearly. If you've ever had difficulty seeing through heat-driven ripples to what was on the other side of a hot parking lot, you've seen a demonstration of the difficulty faced by astronomers gazing through our turbulent atmosphere.