The largest astronomy public outreach event in world history got off to a flying start today with the official opening ceremony at the Franklin Institute in Philadelphia. Over the next four days, tens of thousands of amateur astronomers, from over 130 nations, will be giving people their first look ever through a telescope. This event, 100 Hours of Astronomy (100HA), is a Cornerstone project of the International Year of Astronomy 2009 (IYA2009).

In essence, 100HA is a global star party that will sweep around the world as Earth spins on its axis and turns day into night. Amateur astronomers will be setting up telescopes in a wide variety of venues to show the public the splendors of the universe, including Saturn, the Moon, galaxies, star clusters, and nebulae. 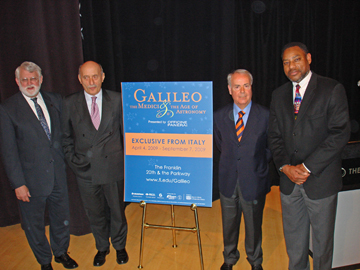 “This will be an unprecedented event,” says 100HA co-chair Mike Simmons, a Los Angeles-based amateur astronomer who is also founder of Astronomers Without Borders. “Nothing like this has ever been attempted, but we already know it will be a major success because of the huge interest generated by our website.”

Simmons says there are more than 2,000 officially registered 100HA events, but that he and his fellow organizers know there are many others that haven’t been registered. “We expect that over the next few days, up to a million people will look through a telescope for the first time,” says Simmons.

The event officially got underway at 11:00 a.m. EDT today, when Franklin Institute president and chief executive officer Dennis Wint welcomed visitors, students, and media representatives to the opening of a new exhibit at the museum featuring 100 astronomical artifacts on loan from the Istituto e Museo di Storia della Scienza in Florence, Italy. Among these items includes one of only two surviving telescopes known to have been used by Galileo.

The International Year of Astronomy celebrates the 400th anniversary of Galileo’s first telescopic observations of the night sky. Using the telescope on display at the Franklin Institute, Galileo observed mountains on the Moon and moons around Jupiter, discoveries that would help usher in the age of modern science, a development that profoundly changed the human condition and our understanding of our place in the universe.

“In the history of humankind, there is no single work of art more influential than Galileo’s telescope,” Wint expressed to me in private after the ceremony. “This is a great honor for the Franklin Institute. To have one of Galileo’s telescope displayed here is an extraordinary once-in-a-lifetime opportunity for the American public to see one of the most important scientific instruments that changed the world. The impact of Galileo continues to this day.”

Istituto e Museo director Paolo Galluzzi emphasized, “This is the first time one of Galileo’s telescopes has crossed the ocean and there will not be a second time.” The Istituto was willing to loan this priceless treasure only because it is temporarily closed for renovations. The special exhibit will be on display in Philadelphia through September 7th, after which it will cross the Atlantic for a brief display in Stockholm, Sweden.

This brass astrolabe dates from Renaissance Italy. Astrolabes were the planispheres of their day. The ornate network is a star map; bright stars are represented by the points of the little wavy flame shapes extending from the grid.

While touring the exhibit, I couldn’t have agreed more with Galluzzi’s recommendation, “Don’t focus only on Galileo’s telescope.” The other artifacts include an exquisitely beautiful collection of astrolabes, maps, compasses, sundials, armillary spheres, quadrants, and other instruments, mostly from Renaissance Italy.

Just as some people are profoundly moved by visits to spiritual sites, I felt like I was on a pilgrimage to the birthplace of modern astronomy. I strongly urge everyone in North America with an interest in astronomy to take advantage of this incredible opportunity to see this exhibit while it’s on our side of the Atlantic. But over the next few days, find a 100 Hours of Astronomy event in your area, and either bring your telescope to share the universe with others, or take a look through a telescope for the first time. As IYA2009 organizers are fond of saying, the universe is yours to discover!