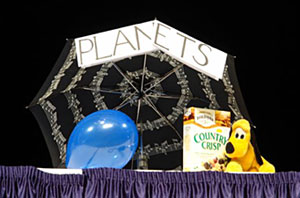 Astronomers considered having two categories of objects under the umbrella term "planets." Large ones like Neptune, here represented by a balloon, would be "classical planets," whereas smaller ones like Ceres and Pluto, represented by a cereal box and a Disney character, would be "dwarf planets." But this proposal went down to defeat, leaving us with eight "planets" and a potentially large number of "dwarf planets" that are, according to the IAU, not planets at all.

It's official: our solar system has eight planets, and Pluto is not one of them. After a tumultuous week at the 26th General Assembly of the International Astronomical Union (IAU) in Prague, Czech Republic, a resolution was passed today that defines a planet in our solar system in such a way that only Mercury, Venus, Earth, Mars, Jupiter, Saturn, Uranus, and Neptune qualify. From now on, smaller round objects orbiting the Sun — including the asteroid Ceres, the former planet Pluto, and the Kuiper Belt iceball with the provisional designation 2003 UB313 — will be called "dwarf planets." The explicit intent of the IAU members who voted with the majority today was that a "dwarf planet" is not a planet.

The original draft resolution for the definition of a planet, published on August 16th, would have included Pluto, Ceres, 2003 UB313, and even Pluto's largest satellite, Charon, among bona fide planets. But this "12-planet proposal" (which was based almost entirely on gravity-induced sphericity) met with strong opposition from dynamicists, who complained that the dominance of an object over its orbital region should also be taken into account. Consequently, in a discussion meeting on August 22nd, a new definition was drafted that would accommodate only the eight largest objects from Mercury through Neptune (not counting moons) and would demote Pluto and similar bodies to "dwarf-planet" status.

A further option considered today was to attach the adjective "classical" to the eight large planets. As Jocelyn Bell-Burnell of the IAU Resolutions Committee pointed out during the well-attended closing session this afternoon (using an inflated balloon, a Disney-toy Pluto, and an umbrella as props), this would mean that there would be two types of planets: classical ones and dwarfs. Such an approach would not rob Pluto of its planethood, but it was rejected by an overwhelming majority of attendees. 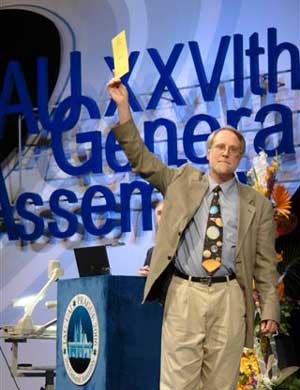 Astronomer Rick Binzel (MIT), a member of the IAU's planet-definition committee, casts his vote for two classes of planets, large "classical" ones and smaller "dwarf" ones. Binzel ended up in the minority.

"Some members of the planet-definition committee will be disappointed with where we are now," commented Bell-Burnell. Indeed, committee member Richard P. Binzel (MIT) stressed that he felt "the word 'planet' must be shared." In an e-mail statement, committee chair Owen J. Gingerich (Harvard-Smithsonian Center for Astrophysics) lamented that "the IAU is in the completely ridiculous situation that a dwarf planet is not a planet." An informal proposal by a number of astronomers to use a distinct single-word term such as "planetoid" or "plutoid" instead of "dwarf planet" wasn't even discussed.

Today's result means that schoolchildren needn't worry about memorizing the names of dozens of planets. Instead, future textbooks will list just eight planets, then go on to mention the large and growing number of dwarf planets, of which Ceres, Pluto, and 2003 UB313 — which codiscoverer Michael E. Brown (Caltech) has informally dubbed "Xena" — are the largest discovered so far.

"I'm of course disappointed that Xena will not be the tenth planet," said Brown in a statement released this afternoon, "but I definitely support the IAU in this difficult and courageous decision. Pluto would never be considered a planet if it were discovered today, and I think the fact that we've now found one Kuiper Belt object bigger than Pluto underscores its shaky status." Now that 2003 UB313's own classification has been resolved, the IAU will ask Brown to suggest a real name for it, says Ted Bowell (Lowell Observatory), who serves on one of the IAU committees responsible for solar-system nomenclature. "We hope to announce a name within a month or so," he said. 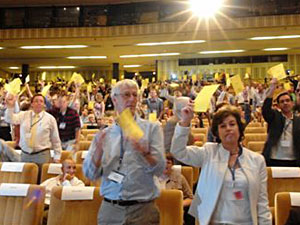 Astronomers at the IAU meeting in Prague cast their votes to define a planet in our solar system as "a celestial body that (a) is in orbit around the Sun, (b) has sufficient mass for its self-gravity to overcome rigid-body forces so that it assumes a hydrostatic equilibrium (nearly round) shape, and (c) has cleared the neighborhood around its orbit."

Although the IAU knocked Pluto off its planet pedestal today, they nevertheless tipped their hat to it by deciding that Pluto should be "recognized as the prototype of a new category of trans-Neptunian objects," that is, dwarf planets that travel around the Sun in long, looping orbits beyond Neptune as opposed to those, like Ceres, that circle closer in. But they couldn't agree on what to call these far-flung bodies; the proposed term "plutonian objects" went down to defeat.

Some astronomers wanted to postpone all these decisions to the IAU's next triennial meeting, in 2009 in Rio de Janeiro, Brazil. But Kaare Aksnes (University of Oslo, Norway) noted that if no definition had been agreed upon this afternoon, "astronomers would have been the laughingstock of the whole world." Michael Rowan-Robinson (Imperial College London) agreed: "We would have been regarded as idiots."