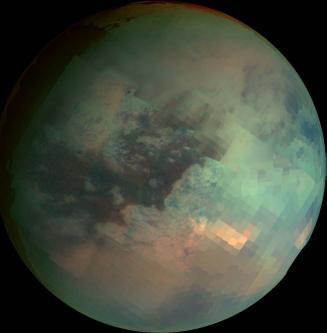 Cassini has found dried lake beds all over Titan — and now a set that are filled with liquid methane. This false-color infrared mosaic of the moon shows bright clouds over the south pole, where the southern summer causes monsoon-like storms to form.

NASA's Cassini spacecraft has discovered the coldest beachfront property in the solar system: dozens of lakes near the north pole of Saturn's moon Titan. Combined with several recent studies, the observations paint a picture of a cool, wet lake district that looks eerily Earth-like: beaches, rolling sand dunes, and an overcast mist with a chance of showers.

The lakes, which Cassini's radar imaged in its July 22nd flyby, are probably liquid methane and ethane. Unlike the 234-by-73-kilometer (145-by-45-mile) possible lake that Cassini imaged near the south pole last summer, Titan's northern lakes are smaller, ranging from 1 to 100 km wide. And unlike the far-southern lake, the northern lakes are fed by what appear to be rivers with tributaries.

"This is the biggest area of lakes we've identified," says Steve Wall (Jet Propulsion Laboratory), a member of the Cassini radar team. "We have seen some things that look like lakes in the southern latitudes, but they have a different style, more like widened rivers."

"These lakes are the darkest thing we've ever seen on Titan," says Cassini team member Larry Soderblom (United States Geological Survey). "We've seen a lot of dark things on Titan, but they've never been dark enough to be lakes. We're 90% sure these are really liquids." 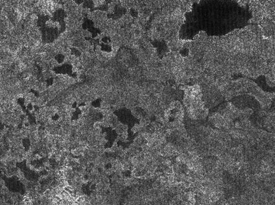 Cassini team members speculate that the lakes may be the source of the methane smog that engulfs the large moon. "Methane might evaporate off the lakes," says Wall. "There has to be some source of methane. The atmosphere is supercharged with it. Lakes are likely candidates."

"We've been looking for the lakes on Titan for a long time," he adds.

Researchers are still unsure how or when the lakes might have formed. They are all found above Titan's arctic circle — about 75° north latitude. The large lake found in the southern hemisphere is below 75° south. "That makes us think that is a latitude dependence and lakes form at the poles," says Wall. "It's consistent with the idea that the poles have a wetter climate."

Polar lakes might also fit in nicely with studies of Titan's weather. In the July 27th issue of Nature, two research teams lay out a weather forecast for the frigid moon that might explain how and where the lakes formed: a perpetual thin methane drizzle, with scattered episodes of torrential downpour.

Using data from the European Space Agency's Huygens probe that landed on Titan on January 14, 2005, a team led by Tetsuya Tokano (Institute for Geophysics and Meteorology, Germany) has determined that a never-ending thin rain falls across the whole of Titan, amounting to about 5 centimeters (2 inches) a year — about what Death Valley receives.

"The rain on Titan is just a slight drizzle," says Christopher McKay (NASA/Ames Research Center), a coauthor of the study. "But it rains all the time, day in, day out. It makes the ground wet and muddy with liquid methane."

Such a methane mist can't carve the winding river networks that the Cassini-Huygens mission has observed — but another kind of storm can. Ricardo Hueso and Agustín Sánchez-Lavega (both of the University of Pais Vasco in Bilbao, Spain) have modeled the large-scale behavior of Titan's atmosphere and found the equivalent of summer monsoons, complete with flash floods, winds up to 72 kilometers per hour (45 miles per hour), and raindrops the size of raisins.

Titan's monsoons are much like Earth's. During the long southern summer, the Sun heats Titan's southern hemisphere, forcing air to rise. When the rising warm air hits cool polar air, it forms thunderhead-style clouds and severe storms — directly over the lake regions.

"In the south, when it's summer, we see convective clouds bubbling up from the south pole and transporting methane to the winter pole," says Jonathan Lunine (University of Arizona). "These lakes probably wax and wane with the seasons: they might get larger in the winter and dry out in the summer."

During the last several flybys, Cassini's radar instrument has seen many features that might be dry lakebeds, especially around the equator, where vast fields of dunes now cover much of the landscape. Either lakes form in different places at different times — or the lakes of Titan are drying up.

"Methane is released from Titan's interior only occasionally," says Lunine. "It's destroyed in the atmosphere and cannot reform. So I'm wondering: are we seeing the gradual depletion of methane on Titan?"