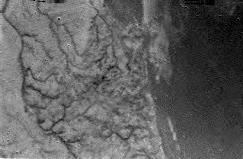 As Huygens descended through the atmosphere of Titan, the probe recorded this system of stubby, interconnected channels leading to an apparent shoreline. The scene is about 5 kilometers (3 miles) wide.

Saturn's large moon Titan is now the most distant world touched by the hand of human technology. Today the European Space Agency, in partnership with NASA, delivered the Huygens probe safely to the surface of Titan after a long descent by parachute through the moon's dense, haze-shrouded atmosphere. Touchdown occurred about 13:34 Central European Time (7:34 a.m. EST).

"I can say that all six experiments are getting good science," added Huygens project scientist Jean-Pierre Lebreton.

The probe's Descent Imager and Spectral Radiometer (DISR) recorded about 350 images in all, and within hours mission scientists were left open-mouthed by their first close-up looks at Titan's amazing landscape. One view, taken from an altitude of 16 km, shows a complex network of dark channels leading to a large, dark lowland. "It's pretty clear that we're seeing drainage channels flowing into what looks like a shoreline," commented DISR principal investigator Martin Tomasko (University of Arizona).

A second image, taken once the probe had landed, shows a muted landscape extending to a distant horizon. The flat terrain is occasionally studded with boulder-size objects. Mission scientists have not yet speculated about what these features are.

More images and other science results — including views from the surface and a preliminary analysis of the atmosphere's composition — should be made public tomorrow.

Huygens slammed into Titan's atmosphere at 22,500 kilometers per hour (3.9 miles per second). Three parachutes were subsequently opened in sequence to slow its descent. It appears that the probe took 2 hours and 27 minutes to reach the surface — a few minutes longer than expected. ESA ground controllers have at least 30 minutes of data from Titan's surface, but Earth-based radio telescopes were still receiving a radio beacon from Huygens 2 hours after landing — meaning the probe survived the harsh, –178° Celsius environment for considerably longer than expected and strongly suggesting that the probe landed on solid ground, rather than in a deep pool of liquid.

Huygens used NASA's Cassini spacecraft for its primary communication link to Earth, beaming signals on two independent channels. ESA officials noted that no science data came through on channel A, but they emphasized that channel B was working perfectly. This built-in redundancy insures that virtually all the planned data will be received. Cassini is in the process of relaying all of Huygens's scientific findings to Earth, and it will repeat the playback eight times.

"The scientific data should unveil the secrets of this new world," said ESA Director-General Jean-Jacques Dordain. Scientists have been fascinated by Titan for decades because it is the only moon in the solar system with a thick atmosphere, and that nitrogen-dominated atmosphere is similar to Earth's in terms of both composition and pressure. In addition, the atmosphere and surface are brimming with organic molecules such as methane and ethane, making this world a virtual laboratory for studying the prebiotic processes that led to life on Earth.

Instruments aboard the 320-kilogram (700-pound) probe measured atmospheric temperatures, pressures, chemical composition, electrical discharges, wind speed, and other characteristics. Prior to the mission, ESA officials repeatedly emphasized that Huygens was designed to be an atmospheric probe, not a lander, so that any data received from the surface was icing on the cake.

Echoing the sentiment of success, ESA's Director of Scientific Programs, David Southwood, said, "This data is for posterity. This is a very major step forward, but it's only the beginning for our science teams."