A pair of nearly identical brown dwarfs — dim, low-mass substars — seems more and more to defy basic models of star formation. But researchers have found a way out. 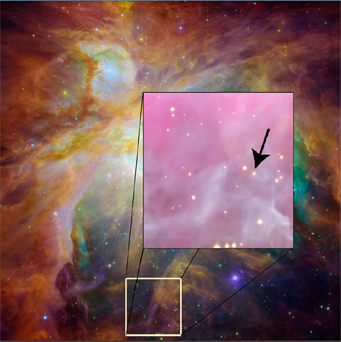 The location of the brown-dwarf binary 2MASS J05352184-0546085 in the Orion Nebula, the closest big, hot star nursery. The two closely-orbiting objects appear as a single point in these infrared images.

Just as sociologists and biologists study twins to understand how people with the same origin can differ, astronomers study binary and multiple stars knowing that they formed at the same time and place. The most valuable binary stars are eclipsing binaries. As the stars cross each other, the depths, shapes, period, and colors of their eclipses, combined with spectroscopy showing the stars' radial velocities, can give very accurate readings of the stars' masses, temperatures, surface brightnesses, and physical sizes.

The brown-dwarf binary in question is located in the Orion Nebula (M42) and is known as 2MASS J05352184-0546085. It is the only pair of brown dwarfs known to eclipse each other. A research group now reports that they can explain what they see — in particular the lower temperature of the more massive component — only by assuming that it is nearly covered in starspots.

Brown dwarfs are sometimes called failed stars; they are intermediate between stars and gas-giant planets. They form the way stars do, by a gas-and-dust cloud contracting under its own gravity, but they have masses too small to create enough pressure and temperature in the core to ignite the hydrogen-fusion reaction and generate energy like a true star. They settle down to about the diameter of Jupiter (a tenth the diameter of the Sun) as they radiate away their heat of formation and grow ever cooler. 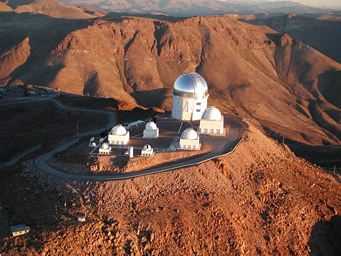 Aerial photograph of the Cerro Tololo Inter-American Observatory in Chile. The scientists used a 1.3 meter telescope for their research on the eclipsing brown dwarf binaries.

At an estimated age of only about 1 million years, the two objects of 2MASS J05352184-0546085 have not yet cooled much or fully contracted. Yilen Gómez Maqueo Chew (Vanderbilt University) and collaborators have just determined, with greater accuracy than ever, the characteristics of both objects. Orbiting each other every 9.8 days, they have masses of 68 and 38 Jupiters with an uncertainty of just 2%. But being so young they are very big for their masses, with 69% and 56% of the Sun's diameter, respectively, to uncertainties of just 1%.

The puzzle is that the larger and more massive of the two bodies is the cooler one (by 200 kelvins), contrary to what should be. The more massive a brown dwarf is, the more heat it should begin with and the slower it ought to cool. This odd discrepancy was already known, but the more accurate sizes and masses firm it up. 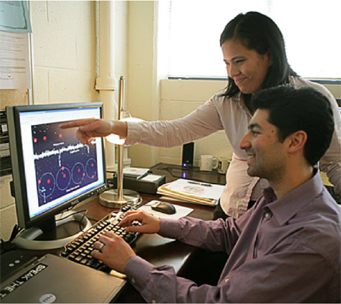 One caveat is that, unlike for human twins, we can’t know for sure that the stars were born at the same time. Yet the larger star would have to be much older than 1 million years to account for the mismatch, says coauthor Keivan Stassun (Vanderbilt University). Such an age difference would make it difficult to explain how the two stars ended up forming a binary system. Then again, “We don’t know how binary stars form anyway,” says Gibor Basri (University of California, Berkeley).

The larger object definitely seems to be the oddball. In addition to appearing too cool, it rotates fast: in 3.3 days as opposed to 14.1 days for its smaller companion (and about 27 days for the Sun). This matters because fast rotation produces a strong magnetic field via the dynamo effect, which in turn creates starspots — cooler areas on the surface.

Extensive starspots could account for the discrepancy in temperature. Assuming a typical temperature for spots — 10 percent cooler than the rest of the surface — the researchers could reproduce the dwarf's observed effective temperature overall by covering 65 percent of its surface in spots. 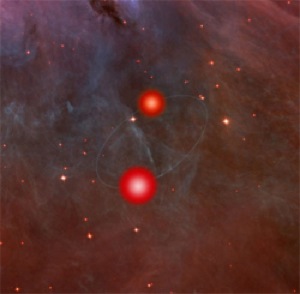 An artist's concept of the pair of orbiting brown dwarfs seen close up.

But location matters. If the spots were distributed unevenly, the astronomers would see the star's brightness fluctuate greatly with each rotation. To avoid this, they have to assume that the spots are either gathered around the pole tipped toward us or are spread evenly all around lower latitudes.

Many questions remain. One problem reminds Basri of a zebra’s stripes: “Is it a cooler star with smallish bright spots, or a warmer star with huge cool spots?”

Understanding magnetic fields in brown dwarfs is clearly a next step. For instance, Basri suggests that the fields may strongly affect not just the surface but also the bulk of the star, slowing down heat flow within it — and thus slowing the star's contraction. Understanding this, however, will be hard, as Stassun says: “We really have no way of probing the interior.”

With such complex processes going on in the larger twin, it would seem premature to discard models of star formation based on the temperature mismatch.

Here's a preprint of the astronomers' paper.

A panorama of the moonlit Cerro Tololo Inter-American Observatory in Chile after sunset.

Is it possible that because the cooler one is more massive it has evolved further? It has already had its day as a sun and is now starting to cool off.

maybe it's so big that it's heat doesn't make it to the surface "quick"enough?

This is an interesting measurement in stellar evolution modeling. The NASA ADS reports indicate the primary is 0.054 M_sun and radius = 0.669 R_sun. The surface gravity measurements used must be balanced on the head of a pin to make the mass of 0.054 solar, otherwise the primary could have more mass and cause larger problems in dating the brown dwarf binary system.

Since this system is approximately 1 Million years old. Is it not likely that as the smaller star approached the larger star that it transfered momentum to the larger star. Thereby speeding the rotation of the larger star. Since the stars orbit each other in 9.8 days, what is the possibility that they will merge in the not too distant (million years or so) future?