How to Build a Galaxy

Astronomers are finding out how iconic disk galaxies form. 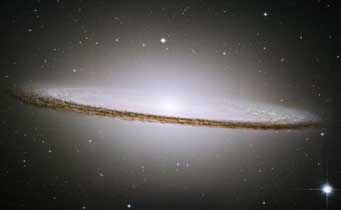 M104, known as the Sombrero Galaxy, has a brilliant bulge encircled by thick dust lanes. The galaxy is 50,000 light-years across and 28 million light-years from Earth.

Sombrero-shaped galaxies like our Milky Way pepper the cosmic scene. If you picked a random star in the universe, it would most likely be in a disk-shaped galaxy with a mass similar to our home swirl of stars. But how did these galactic sombreros form? Astronomers thought they had a pretty good idea, but a growing body of evidence suggests that, when it comes to Milky-Way-mass galaxies, the standard picture is wrong.

Disk galaxies such as the Milky Way have a fat yellow bulge of stars in their centers surrounded by a thin gaseous wheel. Generally, astronomers thought that galaxies’ bulges formed first, coming together over a couple of billion years via mergers. Then, these growing orbs would slowly skirt themselves with disks.

If this picture were true, astronomers should see “naked bulges” in the early universe. So Pieter van Dokkum (Yale University) and his colleagues used archival Hubble and Sloan Digital Sky Survey images to study 401 Milky-Way-mass galaxies, dispersed across the last 11 billion years of cosmic time. (In astronomical parlance, they looked back to a redshift of about 2.5). Regardless of age, all the bulges were fully clothed.

If only all toddlers would follow these young galaxies’ example. 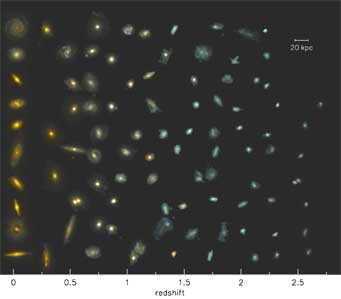 This figure from the team's paper shows examples of Milky-Way-esque galaxies they observed, ranked from left to right by increasing look-back time into the universe. Galaxies at a redshift of about 0.015 are from the Sloan Digital Sky Survey; galaxies at higher redshift are from the Hubble Space Telescope surveys. The color images have a common physical scale, and their intensities are scaled so they are proportional to mass. As you can see, disks (albeit sometimes tiny ones) exist at all cosmic ages. Click to zoom.

By comparing galaxies at different times the team found that, between 11 and 7.5 billion years ago, Milky-Way-mass galaxies beefed up their bulges and disks in tandem and at about the same rate. Fed by cool gas funneled by cosmic filaments into the growing galaxies, star formation was high during this growth phase, enough to create 10 to 15 Suns each year — compare that with the Milky Way’s current 1 Sun/year rate. This influx of gas and the burgeoning bevy of stars it nourished can explain the mass growth without resorting to mergers, the astronomers say. The bulges (and the supermassive black holes hiding inside them) therefore would have grown via more mundane processes, such as clumps migrating from the disk inward to the galaxies’ centers.

After this era of buildup, bulge growth simmered down and the galaxies continued to grow more lethargically at their edges. That’s in keeping with recent studies of gas distribution at the 7.5-billion-year mark and with spirals today.

Although a growing number of observations and computer simulations have been pointing to this picture, it’s in stark contrast to what happens in more massive galaxies, which do use mergers to build up their central regions. Marie Martig (Swinburne University of Technology, Australia) explains that massive galaxies generally occupy denser regions of the universe, where mergers are more common. They also have halos of hot gas that can ultimately stifle the flow of cold material into the galaxies and prevent star formation, which could explain why massive galaxies have grown more slowly than their smaller counterparts in the last 10 billion years or so: the team calculated that from 11 billion years ago to now, Milky-Way-mass galaxies increased their masses by a factor of 10, while more massive galaxies only grew by a factor of 3.

Takashi Okamoto (Hokkaido University, Japan), who simulates galaxy evolution, says that something must delay bulge formation in smaller galaxies similar to ours, something that doesn’t operate in bigger ones. The authors suggest that observations mapping gas’s distribution in and around galaxies in the last several billion years might help disentangle the formation picture.