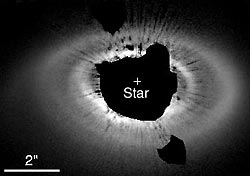 The ring-filled dust disk around HD 141569A, in which planets may or may not be forming. The black areas are omitted because of poor data; the fine radial streaks are artifacts. The part of the disk seen here extends 400 astronomical units from the star. Click for a larger, false-color view showing tails extending farther out, one of them toward the companion star at top left.

The Hubble Space Telescope's new Advanced Camera for Surveys (ACS) has captured a detailed image of spiral rings in a distant protoplanetary disk — the pancake-shaped cloud of gas and dust around a young star in which planets are expected to condense. But contrary to earlier suggestions, the intricate structure of this particular disk is probably caused by a nearby companion star rather than by embedded planets starting to form.

HD 141569A is a very young type-A star 320 light-years away in Libra. Shining at 7th magnitude, it is visible in binoculars. An excess of infrared radiation, attributed to a dusty circumstellar disk, showed up in a survey by the US-Dutch Infrared Astronomical Satellite (IRAS) in the early 1980s. Four years ago by a team led by Alycia J. Weinberger (Carnegie Institution of Washington) presented images of a dark gap in this disk, obtained with Hubble’s NICMOS infrared camera, as possible evidence for planets within it (Sky & Telescope, April 1999, page 18).

The disk computer-stretched into a face-on view. In the top frame, the three spiral patterns are indicated by different colors.

Now the more sensitive ACS paints a different picture. The gap, a faint zone between 215 and 300 astronomical units (Earth-Sun distances) from the star, is indeed there. But the adjacent bright inner ring and broad, fainter outer ring turn out to be tightly-wound spirals. Moreover, two extremely faint spiral arms extend to some 1,200 a.u., and one of them points in the direction of the star's nearby binary companion, HD 141569BC. By comparison, Pluto orbits the Sun at an average distance of 40 a.u.

Finally, some parts of the rings are much brighter than others, and the entire disk seems to be slightly offset from the star.

The most likely cause of these phenomena is tidal interaction with HD 141569BC, according to a large collaboration led by Mark Clampin (Space Telescope Science Institute). The astronomers estimate that this binary, which is probably in an eccentric, unstable orbit around the primary star, must have had a few hundred encounters with the disk over the system's 5-million-year lifetime. However, in a paper submitted to the Astronomical Journal, the team writes that "detailed dynamical modeling of the system is required to explore fully the possible interaction of the disk with HD 141569BC."

So are planets in the disk ruled out by the new Hubble observations? Not really. The new observations also show the disk particles to have a reddish color, and according to Weinberger, "a red color shows growth in the grain population from the very small sizes expected from the interstellar medium." Moreover, says Clampin, the disk "has to have larger planetesimals, given that it is a debris disk."

In addition, other astronomers have detected the glow of H3+ ions in the star's infrared spectrum; they were previously found only in the atmospheres of giant planets in our own solar system. This suggests that gas giants may already be forming in the inner parts of the disk (see A New Test for Extrasolar Planets. Even Clampin and his team concede that the new Hubble images "do not exclude a planet as the mechanism responsible for some of the disk’s structure."