Astronomers using the Hubble Space Telescope have discovered a new moon orbiting the icy planet Pluto. Designated S/2011 (134340) 1 by the International Astronomical Union — but nicknamed P4 — the newcomer orbits Pluto every 32 days at a distance of about 37,000 miles (59,000 km). This puts it between the paths of Nix and Hydra, two moons found circling Pluto in 2005. 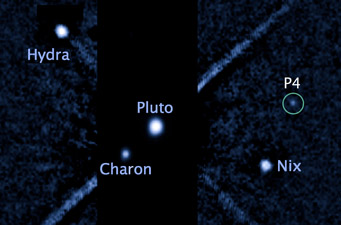 Pluto and its four known moons, including the new one nicknamed "P4," as captured by the Hubble Space Telescope's Wide Field Camera 3 on June 28, 2011. Diagonal streaks are imaging artifacts.

The discovery brings the tally of Pluto's moons (including Charon, its largest) to four, and the total of all known planetary satellites to 171.

A team led by Mark Showalter (SETI Institute) and Douglas Hamilton (University of Maryland) spotted P4 in images taken by Hubble's Wide Field Camera 3 on three separate occasions — June 28, July 3, and July 18, 2011. The observations took place when Pluto was in opposition to Earth, at a distance of just over 31 astronomical units. After the first two sessions, "we were 99% sure that we had found a new moon," Hamilton tells Sky & Telescope. "We then requested Director's Discretionary Time, which was approved rapidly and the additional July 18th data confirmed our discovery."

The astronomers have been using HST to map Pluto and its surroundings in preparation for New Horizons, a spacecraft steadily making its way toward the outer reaches of the solar system to study Pluto and other cold, dark inhabitants of the Kuiper Belt.

According to today's announcement by the IAU's Central Bureau for Astronomical Telegrams, P4 is only magnitude 26 — about a tenth as bright as Nix. Assuming that its reflectivity is the same as Charon's (35%), then P4 would measure only 9 miles (14 km) across; if it's much darker, it could be as large as 25 miles (40 km). Either way, it's small in comparison to Charon, which is 750 miles (1,210 km) in diameter. 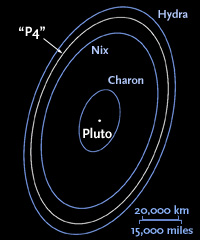 "P4," the nickname for Pluto's fourth moon, circles the planet in an orbit roughly midway between those of Nix and Hydra.

The discovery will mean that New Horizons will have more to do when it reaches its destination in July 2015. "It's going to make the encounter even more exciting, and even busier than the pace we planned with just three moons to observe," says Alan Stern, the mission's principal investigator.

Astronomers think that P4 and its siblings formed when a large object collided with Pluto in the distant past. The resulting rocky debris began orbiting the dwarf planet and eventually coalesced into satellites. Earth's own Moon is believed to have formed in the same manner.

And what about a fitting name for the new find? "Mark and I like the name Cerberus, the three-headed dog that guards Pluto's realm," Hamilton admits. "But the name is unofficial for now!"

According to experts, the name P4 will stick at least for a month. First, more observations are needed — both to move the naming process along and to aid New Horizons mission planning. So the discovery team plans to submit a new HST proposal to help nail down the orbit.

Four moons! Planet or no planet, Pluto is clearly a very interesting object, or system.

Do the other large Kuiper Belt objects discovered so far have 'moons'?

Wonderful!! Great Discovery - HST still going strong! There may be many more satellites around our Planets - HST GO AHEAD!!

That name was suggested and I think it's a good one, since Cerberos is taken. Too bad all the good names are taken. I don't think it would be good to mix, say, Hawai'ian gods with Greek gods. Pluto has a family.

A three-headed dog...guarding the gates of Hell...this object shouldn't be there, which would be an excellent reason for the name. I wish my computer hadn't burnt out so I could put this on GravitySimulator.

Lots of KBO's have extraordinarily bright surfaces. I suspect the three-headed dog is pretty bright because it's coated with crystalline ice. The whole thing might be crystalline ice.

I would like to thank Dr. Stern for launching New Horizons. That's really the only way to find out anything about this, carry the camera to Pluto.

Cerberos sounds like a brand of salt available in new Zealand.
I would like to suggest a different category of name for P4 ------ something unique like FLUFFY. After all Fluffy was the name of the three headed dog guarding the entrance to the Chamber of Secrets in the Harry Potter movie, The Philosophers Stone.

Well done HST! You may be getting near your use-by-date, but you STILL keep churning out those searing discoveries1

Whoever said Solar System astronomy is was dull undynamic, and boring? When I was a pupil at Otago Boys High School (Otago, NZ) in the 60's, we had 9 planets, Pluto had no moons at all (Charon was not discovered 'til 1976), and there were "only" 12 moons of Jupiter, and 9 of Saturn. Pluto was at least twice the "size" it is officially now. Now in mid 2011, we have 171 moons in our Solar System... that's what I proudly call progress!

The so-called "Salt company in NZ" is predominantly a sauce company, called "Cerebos":- (pronounce SEAR-REE-BOSS). I should know, 'cause I actually live in NZ and I've purchased Cerebos products from my local supermarket before (just a polite correcton from myself). As for the final IUA name for "P4", I'll gadly leave that to the official IAU naming authorities.... whatever the outcome, I'm sure their final choice will be an appropriate one.

I am a 10th grader fascinated by astronomy. Planetary science is indeed exciting! I think that I have an interesting name for Pluto's new moon that should be considered by the IAU - "EMOSEWA" (backwards for "awesome") since this really is an AWESOME discovery! The HST is a great telescope, and I'm really excited about the future discoveries to come.