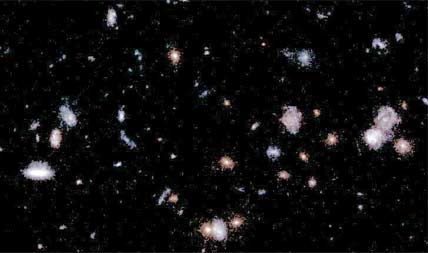 About 1/20,000 of the Hubble GEMS image. Although it's not as deep as the original Hubble Deep Field, the GEMS mosaic image covers 150 times as much area. Filling the view is the 'cosmic wallpaper' of extremely distant, faint galaxies.

Remember the Hubble Deep Fields? Well, there's a new and bigger version out. At the 203rd meeting of the American Astronomical Society in Atlanta last week, astronomers released a breathtaking mosaic of 78 Hubble photos covering a square of sky ½° wide — about as large as the full Moon — in the southern constellation Fornax. While it is not nearly as deep as the original Hubble Deep Fields (reaching to 24th or 25th magnitude instead of about 30th), its resolution is sharper, slightly better than 0.1 arcsecond, since the new images come from Hubble's Advanced Camera for Surveys (ACS). The project is one of a variety of deep-field assaults being carried out on the same spot of sky.

The new mosaic has 3 billion pixels. "This will be the largest contiguous Hubble color image for years to come," says team member Eric F. Bell (Max-Planck-Institute for Astronomy, Heidelberg). And it's not just pretty pictures: the survey, known as GEMS (Galaxy Evolution from Morphology and Spectral energy distributions), is revealing exciting new information on the evolution of galaxies in the past 9 billion years.

Not only does the GEMS study cover a large area at high resolution; it is also a three-dimensional map. Of the 60,000 or so galaxies that have been identified in the mosaic, distances have been found for 10,000 using another deep survey of the same area carried out with a 2.2-meter telescope at the European La Silla observatory in Chile. The COMBO 17 program, led by Christian Wolf (University of Oxford) and Klaus Meisenheimer (MPIA), reaches as deep as 26th magnitude in 17 colors but with much poorer resolution (see a comparison of the imagery.) COMBO's multicolor brightness measurements give enough information to determine galaxy redshifts to an accuracy of a few percent. The true value of GEMS lies in combining these ground-based distances with the high-resolution images by Hubble.

For example, says team member Shardha Jogee (Space Telescope Science Institute), the survey will reveal how common barred spiral galaxies were in the early universe. At present, says Jogee, some 70 to 90 percent of all spirals (including our Milky Way) have bars to some extent, but no one knows exactly how they form or how long they last. Because a bar's tidal effects can draw interstellar gas toward the core of the galaxy and produce huge bursts of star formation, bars evidently play an important role in galaxy evolution. "A previous study of the Hubble Deep Field seemed to indicate that barred spirals were absent in the distant past," says Jogee, "but in our much larger field, we see them at every epoch." A precise statistical analysis of the number of barred galaxies is in the works.

Surprisingly, the increase in elliptical galaxies' relative numbers is roughly the same in high-density clusters as in lower-density regions of the universe. According to Bell, this shows that low-velocity galaxy encounters and mergers are the most dominant process in the evolution of one galaxy type into another.

The GEMS survey will certainly be a rich trove of information about galaxy evolution for many years. Jogee looks forward to learning more about multiple-galaxy interactions, black-hole formation, the host galaxies of active galactic nuclei (of which there are about 80 in the survey), and mergers of spirals to become ellipticals. Of course, the observers work closely with theorists who devise ever-more-detailed computer simulations of the various physical processes that play a role in galactic evolution. "There's a lot of thing that we will be able to say something about for the first time," Jogee says.

This is becoming a very well-studied bit of sky. The GEMS field coincides with the extended Chandra Deep Field, which was imaged in X-rays by the Chandra X-Ray Observatory. The central fifth of the GEMS field is being imaged more deeply by the many-wavelength GOODS Survey. And within the GOODS area we will soon see will the smaller, deeper Hubble Ultra-Deep Field (UDF), the size of a single ACS camera frame. The UDF is currently scheduled for release in March.