Astronomers have long realized that some supernovae, dubbed Type Ia, involve binary-star systems containing at least one white dwarf. When the white dwarf accumulates enough matter to push it past 1.4 solar masses (the Chandrasekhar limit), it destroys itself in a powerful explosion that can briefly outshine its host galaxy. 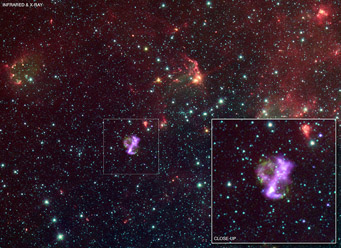 This image comes from NASA's Chandra X-ray Observatory, and shows a supernova remnant called SNR 0104. The remnant is in the Small Magellanic Cloud, a small galaxy near the Milky Way. Astronomers think that SNR 0104 is the remains of a Type Ia supernova.

But the nature of the companion star has remained a mystery. Are they normal (main-sequence) stars like our Sun? Or are they white dwarfs, each pair spiraling ever closer until they collide?

Now, a team led by Assaf Sternberg and Avishay Gal-Yam (Weizmann Institute of Science, Israel) concludes that a main-sequence star must be involved, at least some of the time.

They reason that if the white dwarf's companion were a normal or giant star, the surrounding interstellar space should be filled with gas blown off that star before the white dwarf explodes. When the supernova occurs, a strong pulse of light and energy would pass through the previously shed gas and create telltale spectral signatures.

The observers studied the spectra of 46 supernovae in nearby spiral galaxies using the spectrometers on the Keck and Magellan telescopes. Of those supernovae, 35 were Type Ia and 11 were of the Type II variety (involving the explosion of a single massive star). They scanned these spectra for sodium, an element with strong spectral lines commonly found in interstellar space. They also searched for blueshifting of the sodium lines, indicating gas moving outward from the system toward Earth, and found that their supernovae sample did, in fact, show signs of matter moving quickly in the observers' direction. 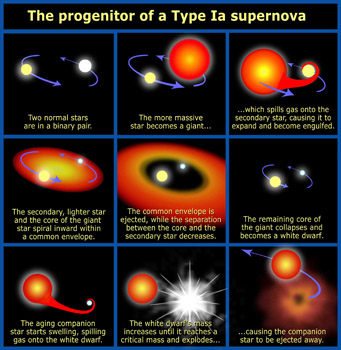 This image shows the evolution of a Type Ia supernova.

NASA, ESA and A. Field (STScI)

All of the evidence pointed toward a binary system with one white dwarf and one normal star. If the examined supernovae had resulted from the merger of two white dwarfs, the gas blown off from the stars would have dissipated long ago, and would not have been visible to astronomers. And a Type II supernova would not have produced the same kind of spectral signature. "You would expect blueshifted sodium in Type II supernovae, but it should have different properties than what you would expect from a Type Ia explosion," says Sternberg.

Could these findings have been the result of a lucky draw? The team explored other possible causes for the blueshifts: randomly moving clouds of gas in the supernovae's host galaxies, outward-blowing galactic winds, and gas being exhaled by massive, short-lived stars. But the astronomers determined that there was only a 2% probability that what they observed was due to chance.

The astronomers have not made an airtight case, however. "I suspect the results are also marginally consistent with zero," says supernova specialist Robert Kirshner (Harvard-Smithsonian Center for Astrophysics). "This is not the fault of the observers — they have a sound approach. Basically, they need to build up the statistics — both for the Type Ia events, where they expect to see the effect, and for other sources (like Type II events) where they do not expect it."

Read more about the paper here.

"They also searched for blue-shifting of the sodium lines, indicating gas moving outward at high speed from the system toward Earth, and found that their supernovae sample did, in fact, show signs of matter moving quickly in the observers' direction." When stars swell in their red-giant phase, it’s like an expanding soap bubble; an SN is like a fire-cracker. How do the high speed sodium atoms provide evidence for anything but an explosion?

You are correct, fast moving sodium could imply an explosion. The features we see are of order of a few 10 km/s to 150 km/s. The velocity of the supernova ejecta are of the order of 10,000 km/s, so this material can't be the ejecta.

In a nut shell whst we found is slow (I don't know why S&T had it as fast) material that is consistant with outfllows from a single degenerate system. We give an example of RS Ophiuchi, a recurrent novae system (i.e., a single digenerate system) that exhibits such features.