After 45 years at the Smithsonian Astrophysical Observatory (located on the grounds of Harvard College Observatory in Cambridge, Massachusetts), the organization that serves as the clearinghouse for astronomical discoveries is moving to a new home. As of February 1st, the Director of the International Astronomical Union's Central Bureau for Astronomical Telegrams (CBAT) will be headquartered at Harvard University's Department of Earth and Planetary Sciences, located less than a mile away from SAO. 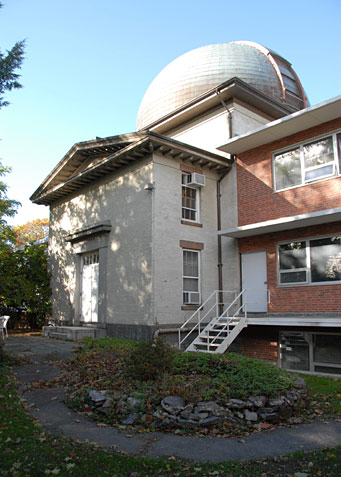 The IAU's Central Bureau for Astronomical Telegrams was headquartered at the Harvard College Observatory for 45 years. HCO is now part of the Smithsonian Astrophysical Observatory. The dome has housed Harvard's 15-inch "Great Refractor" since 1847.

Since 1882 the CBAT has played a vital function by confirming and announcing discoveries to the worldwide astronomical community. These discoveries include new planetary satellites, meteor showers, comets, novae, and supernovae, and have in the past included many other kinds of objects. Starting in 1883, the HCO issued such announcements for the Western Hemisphere, a function that only stopped when the CBAT moved from Copenhagen to Cambridge in 1965, and the HCO staff was moved over to operate the Bureau as an SAO function.

"Our relocation shouldn't be a big deal to the outside world," says CBAT director Dan Green. He added that the transition should involve little or no disruption of activities. The internet has profoundly changed the way astronomy information is disseminated, and the CBAT stopped sending telegrams in the early 1990s. Now its announcements are even issued via RSS/XML feeds, so that Blackberry owners can follow the latest discoveries. Green notes that there still is an important role for the Bureau in the 21st century.

Green will direct a new Cometary Science Center that is being developed to work alongside the CBAT. "It will be an international center for archiving historical information, images, light curves, and other data at all wavelengths with a big website presence," says Green. Green has lined up a core team of several prominent comet researchers and is soliciting funding to build up a support staff.

The Minor Planet Center, which will continue to work closely with the CBAT for such topics as comet and satellite discoveries, will remain at its current SAO location.

Robert, this is an informative article on the history of CBAT --but it misses out on WHY this move was made. I remember my journalism class at Lake Charles High: Who, what, when, where, and why? The SAO, IAU and Harvard did not make this move on whim. Was CBAT not performing well? Is it a question of money and budgets? Please give us more than what was in the press release handed out by these --or any other--institutions. Thanks.