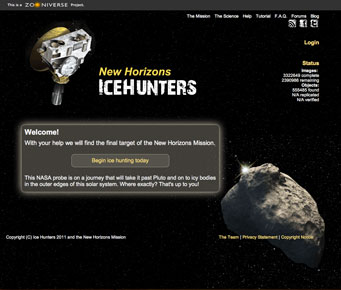 A screenshot of the new citizen science project, Icehunters, produced by Southern Illinois University Edwardsville in collaboration with the New Horizons project and Zooniverse.

Back in January 2006, NASA launched the New Horizons spacecraft to skim past Pluto and its moons and, perhaps, other cold worlds in the outer reaches of the solar system. New Horizons will fly by the dwarf planet in July 2015 and cruise through the heart of the Kuiper Belt from 2016 to 2020. Astronomers think the craft will have enough fuel to change course slightly and visit a few of the icy bodies there — if any happen to lie close enough to its trajectory.

This is where you come in. Imagine what you might feel if NASA decides to maneuver the craft toward a Kuiper Belt object you helped discover!

That is the kind of excitement that the newest “Zooniverse” citizen science project, Icehunters, is hoping to generate.

The program was developed at Southern Illinois University in March by Pamela Gay and Cory Lehan. A beta version launched in May drew thousands of interested citizens and encouraged the team to take the site live on Tuesday.

The difference images used on Icehunters.org, were created by subtracting two telescopic wide field-images from each other .The image to the right shows blobs and streaks marked with a circle and an asterisk respectively. Blobs are Kuiper Belt objects, while streaks are asteroids in the main belt between Mars and Jupiter.

The website offers up deep, wide-field sky images. The images are shown as subtracted double exposures, a process developed specially for this project, from images taken in 2004 and 2005 using the Subaru Telescope atop Mauna Kea in Hawaii and the Magellan Telescope in Chile. The original images show normal star fields. The images on the website were created by subtracting one normal image from another taken two hours to two days apart. The result is a grey, grainy “difference image,” where the immobile background stars are greatly dampened and moving or changing objects stand out.

Registered Ice Hunters scan these images for certain types of blobs and streaks. The streaks represent fast-moving foreground objects — probably small main-belt asteroids between Jupiter and Mars. Blobs are slower worlds of the Kuiper Belt — or perhaps variable stars, or image flaws. Humans can sort them out better than machines. “These people are going to help us catalogue the Kuiper Belt objects,” says Gay, “and become a part of the team that is trying to map the solar system.” 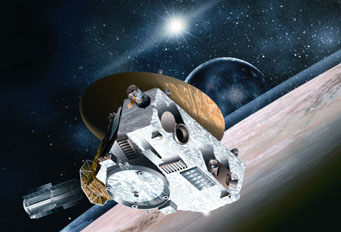 An artists impression of the New Horizons probe flying by Pluto. The craft with reach the dwarf planet in 2015, and cruise around the Kuiper Belt between 2016 and 2020.

Once Kuiper Belt candidates are found, the many images will be correlated with each other to identify multiple sightings of the same object and determine its orbit. The New Horizons team hopes to use one or more particularly lucky finds to maneuver the spacecraft after it passes Pluto.

Although the Icehunters project will look around the entire Kuiper Belt, New Horizons can’t maneuver much. “Not all the identified objects will be in the right way,” says John Spencer (Southwest Research Institute), a member of the New Horizons science team, “but at least one or two of them will probably be.”

Even in its first days the project has garnered a great deal of public interest. Gay reports that the traffic to the website went through the roof early Wednesday morning, forcing the team to start using an additional server. When the public goes through the current set of uploaded images (each will be sent to several people for blind cross-checking), additional, more recent images will become available. The project will end when the science team runs out of images.

“I think they will have fun,” said Spencer of the public. “They can get involved and make real contributions to science. And they’ll learn a little astronomy along the way too.”

Hi Shweta, and welcome to the team. I found your article very interesting and plan on following through with the Zooniverse hunt for KBOs.
There's been lots of exciting news around KBOs coming from teams from MIT and the Paris Observatory. I hope to see some coverage of this important research in the future.