Image Processing from the Cutting Edge 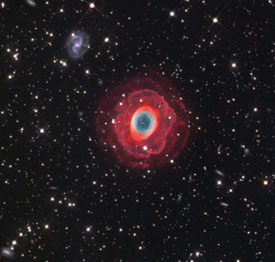 With the emergence of the Internet as the main form of communication in the astronomy community, amateurs often correspond for years without ever meeting and exchanging ideas on a personal level. With this in mind, amateur imager Steve Mandel saw a need to put a face on the names behind the emails and forum posts, as well as the potential for great strides to be made in digital astrophotography processing and imaging. Out of this idea was born the Advanced Imaging Conference (AIC). CCD astrophotographers from around the globe converged on San Jose, California, the weekend of November 6th for the first AIC. With an attendance limit of 140, registration filled up weeks before the event, guaranteeing that this will be an annual occurrence. "The presentations were superb and almost everyone wants to do this again next year," says Mandel. "We are already planning for 2005."

Imagers from as far away as Chile were treated to presentations by a host of expert astrophotographers. Many of the talks focused around the debate of what is "true color" in astrophotography. Don Goldman summed up the camps of color image processing as falling into two groups: the histogrammers — those who predominately use Photoshop's "histogram" functions to monitor changes made during various processing steps, and the G2Vers — imagers who calibrate color data based on the color of a Sun-like G2V star.

From the histogrammer camp, imaging mavericks such as Ron Wodaski, who's book The New CCD Astronomy has become the standard text introduction to image processing, demonstrated his "zone system" technique, by dissecting the histogram data. Sky & Telescope contributing photographer Tony Hallas (who recently moved to the digital medium) gave tips on artistic image composition and color balance. G2Vers John Smith and Stan Moore both presented an analytical approach to image acquisition and calibration. 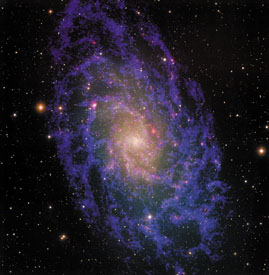 Travis Rector of the National Optical Astronomy Observatory used Adobe Photoshop CS to combine visible and radio observations for this image of Messier 33.

Travis Rector of the National Optical Astronomy Observatory enlightened the group with processing techniques he uses to combine and display images from multiple bandpass filters taken with professional instruments such as the Hubble Space Telescope, using Adobe Photoshop. Benoit Schillings, designer of the first adaptive optics (high-speed guider) unit for amateur telescopes, the AO-7, and Stan Moore both shared their techniques using the AO-7 to achieve the highest resolution imaging possible with amateur equipment.

Sponsors Santa Barbara Instrument Group (SBIG), Software Bisque, and RC Optical Systems all used the opportunity to announce new products and to give attendees a window into the future of CCD imaging. SBIG showcased products such as the ST-402, a new deep space spectrograph, and tentative plans for two CCD cameras based on new Kodak chips. Software Bisque unleashed the Software Bisque Observatory Suite (SBOS), software integration that ties together all parts of the user's observatory into one manageable package, and the Telescope Control System (TCS), which retrofits the legendary Paramount technology to other manufacturers' mounts. RC Optical announced a new field flattener for its Ritchey-Chrétien reflectors to accommodate the growing size of CCD chips.

Other manufacturers present were Bob Denny of DC3-Dreams, who demonstrated his ACP observatory control software, and CCDWare which announced the release of PEMPro, a program that learns your mount's periodic error and take it into account, to create perfectly tracked subexposures without the need of an autoguider.