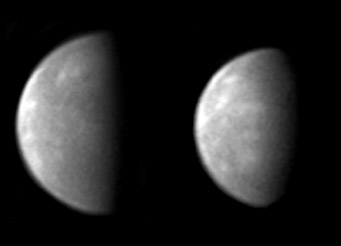 Using the 4.1-meter SOAR Telescope stopped down to 1.35 meters, astronomer Gerald Cecil and undergraduate Dmitry Rashkeev managed to resolve details as small as 15 km across on March 23 and April 1, 2007. Click on the image to display the resulting map compared with earlier radar maps.

Astronomers at the University of North Carolina have published a new map of the surface of Mercury, containing features previously unseen. Their map is based a technique familiar to amateur planetary imagers: "lucky imaging." That is, using a webcam to obtain crisp frames.

Gerald Cecil and undergraduate Dmitry Rashkeev installed an aperture mask over the front of the 4.1-meter SOAR Telescope at Cerro Pachon, Chile, that stopped the scope down to a 1.35-meter, f/38 telescope. Their "advanced webcam" consisted of a specialized camera with 10-micron pixels capable of recording 140 frames per second. The entire system offers a theoretical resolution of 0.06 arcsecond per pixel. 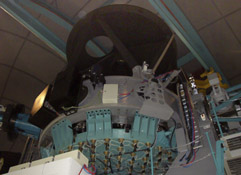 With everything in place, they specifically targeted part of the hemisphere not mapped by the Mariner 10 spacecraft three decades ago. On the mornings of March 23rd and April 1st, the team managed to record more than 30,000 frames around sunrise. After software picked out the best frames, the final stack of the sharpest images achieved an angular resolution of 0.2 arcsecond. Their results appear in the October issue of the Astronomical Journal.

Although NASA's Messenger spacecraft is due to make its first flyby of the elusive planet in January 2008, results like these can help discover regions of particular interest. Already, the team's new map shows bright splotches thought to be fresh craters 15 to 150 km across, as well as darker regions at mid-latitudes associated with ancient lava flows.

The preprint for this article is available here.