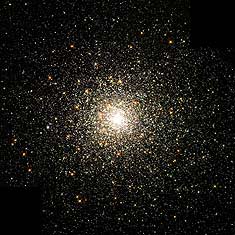 M80 (NGC 6093) in Scorpius is one of our Milky Way's most photogenic globular clusters, as this Hubble Space Telescope image shows.

Globular star clusters are usually found in the outskirts of the galaxies whose centers they orbit. Our own Milky Way hosts about 150 of them, each sporting hundreds of thousands of stars. But now astronomers have discovered a population of globulars unbound to any galaxy. These orphaned star systems wander like vagabonds amid the members of a galaxy cluster. Michael West (University of Hawaii) announced the new findings, on behalf of two research teams, at the general assembly of the International Astronomical Union now under way in Sydney, Australia.

Astronomers have known for more than 50 years that 10 to 20 percent of the light from galaxy clusters comes from material between the galaxies, and rogue globular clusters seemed a likely source. But finding intergalactic globulars has been difficult. Most would be located near a cluster's center, itself typically home to a giant galaxy. Distinguishing between intergalactic globulars and those bound to a central cluster galaxy has thus far been impossible.

Abell 1185, 400 million light-years away in Ursa Major, offered a rare opportunity for success. X-ray images of the cluster had shown that the center of its intergalactic gas distribution is offset from the system's brightest galaxy. If the gas pools at the center of Abell 1185's mass distribution, as seems likely, then chances would be improved for the unambiguous detection of intergalactic globulars. According to West, Abell 1185 is the only cluster known within 500 million light-years that doesn't harbor a complicating giant galaxy at its center. 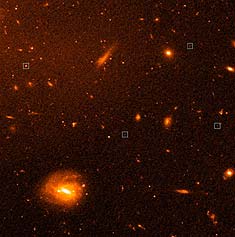 This image from the Hubble Space Telescope shows a small part of Abell 1185, a cluster of several thousand galaxies 400 million light-years away in Ursa Major. The boxes indicate several objects recently identified as intergalactic globular clusters, that is, star clusters not bound to any of Abell 1185's individual galaxies.

West and his colleagues obtained new images of Abell 1185 with the Hubble Space Telescope's Wide Field and Planetary Camera 2. These revealed 99 point sources in a field centered on the peak of the X-ray distribution. Ruling out foreground galactic stars and background galaxies, the astronomers were left with globular clusters as the most likely candidate, the nature of which was confirmed (for all but three) with images from Hubble's Advanced Camera for Surveys (ACS). The ACS sighted several hundred additional globulars too.

While they may have formed where they are, it's more likely that the globular clusters would have developed within galaxies and subsequently been torn away during violent interactions with other cluster members — the parent galaxies themselves may no longer exist.

"The colors of normal globular clusters depend on the mass of the parent galaxy. Globulars in larger galaxies tend to be slightly redder than those in smaller galaxies," says West. "Our hope is that by doing a census of the colors of the hundreds of intergalactic globulars that we have discovered, we will be able to infer how many galaxies and which types have been destroyed over the history of the universe."

"These globulars are the only survivors of the destruction of their parent galaxy, and we may be able to learn more about galaxy death and destruction that has occurred over billions of years," adds West.

West and his team serendipitously discovered an intergalactic globular much closer to home, in the Virgo Cluster. Their results will be published in the Astronomical Journal. Additional Hubble time will be used to further study the globulars in Abell 1185 and to search for new ones in the Virgo Cluster. Furthermore, Hubble's improved capabilities will enable galaxy clusters beyond 500 million light-years to be targeted.