The Hubble Space Telescope's Advanced Camera for Surveys captured these images of the expanding light echo around V838 Monocerotis in May (left), September (center), and October 2002 (right). They show light from an early-2002 explosion reflected off shells of dust that were probably ejected during earlier phases of the star's evolution. These unpublished images were displayed by Howard E. Bond (Space Telescope Science Institute) and his colleagues at the American Astronomical Society's meeting in Seattle, Washington, on January 7, 2003. Sky & Telescope has prepared an animated GIF from these views; it is available in two formats: 225 x 225 pixels (35 kilobytes) and 480 x 480 pixels (340 kilobytes).

A team of astronomers led by Howard E. Bond (Space Telescope Science Institute) has used the Advanced Camera for Surveys (ACS) aboard the Hubble Space Telescope to image the most spectacular light echoes ever seen. The group observed the bright reflections from an enigmatic exploding star at four epochs between late April and late October 2002. The results were announced yesterday in a poster presentation at the American Astronomical Society meeting in Seattle, Washington.

Light echoes occur when the radiation from a stellar blast is reflected by interstellar dust in the immediate neighborhood of the explosion. Almost 16 years ago, light echoes were seen surrounding Supernova 1987A in the Large Magellanic Cloud; the last time they were observed in our own Milky Way galaxy was in 1936. They give the impression of a circumstellar shell that expands much faster than light. But in fact nothing moves; we merely see different parts of the circumstellar material being lit up by the explosion at different moments in time.

The stellar explosion, in the constellation Monoceros, the Unicorn, was discovered on January 6, 2002, by Australian amateur astronomer Nicholas J. Brown. Now known as V838 Monocerotis, it is a most remarkable object with an unprecedented light curve. On February 6th, V838 Mon reached a peak brightness of 6.7 magnitude — a 4,000-fold brightening — and it had a very bluish color. After a temporary dip in mid-February, there was a second, prolonged brightening in early March, which was noticeably redder. 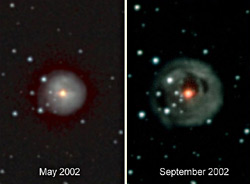 The explosive variable star V838 Monocerotis has evolved dramatically since its discovery in early 2002. These images from the South African Astronomical Observatory's 1-meter telescope show the expansion of the star's light echo, caused by light from the eruption bouncing off dust surrounding the star.

By then, Space Shuttle astronauts had installed Hubble's sensitive, high-resolution ACS. So when ground-based telescopes observed light echoes of the explosion a few weeks later, Bond and his colleagues applied for emergency "director's discretionary time." The first monochromatic image of V838 Mon was obtained on April 30th; full-color observations were carried out on May 20th, September 2nd, and October 28th.

The yet-to-be published ACS images of the V838 Mon light echoes are a bit more than an arcminute across — almost twice the apparent diameter of Jupiter in the sky. A few shell-like structures and many whispy details show up. What's more, one can even distinguish separate bluer and redder echoes from the two distinct brightness peaks. "Continuous observations of the echo will allow us to construct the first fully three-dimensional map of a circumstellar envelope," write Bond and his colleagues.

Meanwhile, the true identity of V838 Mon remains a complete mystery. From the changing geometry of the light echoes and from polarimetric measurements, the team derives a distance of almost 20,000 light-years, which means that the explosion was about a million times more luminous than the Sun. Spectroscopic observations made by R. Mark Wagner (University of Arizona) and others with the 6.5-meter telescope at the MMT Observatory at Mount Hopkins, Arizona, reveal that V838 Mon is actually a binary system, consisting of a hot B-type star and a very cool M star. It's the red M star that underwent the outburst.

However, according to the researchers, the expansion velocity of the ejected material is much smaller than in a classical nova, and the light curve doesn't match the so-called helium flash of an evolved Sun-like star that is about to produce a planetary nebula and turn into a white dwarf. A similar enigmatic outburst was seen in the central bulge of the Andromeda Galaxy in 1989, but that explosion, known as M31RV, hasn't been studied in detail.