On the much anticipated opening weekend of Interstellar, senior contributing editor Bob Naeye reviews the movie's facts and foibles.

Few films in recent years have intrigued me as much as Interstellar, a highly ambitious movie directed by Christopher Nolan and starring Matthew McConaughey, Anne Hathaway, and Jessica Chastain. Trailers and reviews left me curious about the storyline of a future Earth dessicated by dust bowls and dying crops, and voyages beyond our solar system made possible by a wormhole. Most of all, I wondered whether the movie would fall within the realm of science fiction or science fantasy.

By science fiction, I mean movies such as 2001: A Space Odyssey, in which the filmmakers allow their plots to be constrained by the known laws of physics. In contrast, science fantasy franchises such as Star Trek and Star Wars ignore science whenever it gets in the way of entertaining storylines.

To my delight, Interstellar clearly falls within the domain of true sci-fi. The producers were clearly inspired by the science, and they even used the time dilation from Einstein’s general theory of relativity to enhance the drama and ask interesting moral questions of the characters. Compared to the vast majority of Hollywood flicks, I give Interstellar high marks for its attempts at scientific realism.

To make a long story short (the movie is nearly 3 hours), Earth is dying and NASA scientists led by Professor Brand (played by Michael Caine) realize that humanity needs to find another planet to avoid extinction. And just when the situation turns critical, a wormhole magically shows up near Saturn. Who put the wormhole there, and why, is suggested near the end. It enables spaceships to travel to another galaxy, where they enter a region of space near a black hole named Gargantua and about a dozen potentially habitable planets.

Astronauts sent decades earlier returned information through the wormhole indicating that three worlds are potentially suitable for human habitation. So NASA sends a crew of four to learn more. Piloted by McConaughey’s character Cooper and including Brand’s daughter Amelia (played by Hathaway) and two others, the spaceship travels through the wormhole to the remote galaxy.

Nolan hired retired Caltech physicist Kip Thorne as a scientific consultant, a role significant enough that he’s credited as an executive producer. Thorne helped the filmmakers produce a scientifically plausible wormhole. We don’t know whether wormholes exist, but I liked this device for making interstellar travel possible because it doesn’t rely on Star Trekkian faster-than-light warp drives, which are physically impossible. The movie’s wormhole is visually stunning, but we’ll probably never know whether it has any connection to physical reality.

My biggest scientific beef is what happens when the crew arrives in the other galaxy. They travel to the planets themselves, even though they lack sufficient fuel to visit all of them. This sets up interesting discussions among the crew, because they have to decide which planets to visit and in what order. Time is of the essence. Because some of the worlds are deep within the black hole’s gravitational well (something that’s scientifically preposterous), relativity’s time dilation means that visiting those planets would cause the crew to age much slower than the people back on Earth, raising moral dilemmas when the mission’s stated objective is to save humanity.

In reality, future astronauts would instead deploy telescopes to study the planets’ atmospheres from afar. Using spectroscopy, they could more quickly and efficiently ascertain which worlds have environments most promising for human settlement. NASA could have built such a telescope —  the Terrestrial Planet Finder (TPF) — within the next decade if given adequate funding by Congress. And if Cooper’s crew deployed a TPF, they could have avoided wasting time on the first two worlds, which were clearly unsuitable for colonization. Of course, bypassing the landings would have robbed the plot of some of its most dramatic moments.

Cooper later takes the spaceship very close to Gargantua, which appears to be a stellar-mass black hole given its size relative to the spaceship. (The movie states that the black hole is supermassive, but that was something that I did not hear because of the film's poor sound quality. Even so, a supermassive black hole would be roughly the size of the solar system, and given the perspective compared with the spaceship, this size wasn't apparent on screen.) The filmmakers took great effort to produce a scientifically accurate rendering of the black hole, including the bending of light. But they neglected to include the Doppler effect and relativistic beaming in the surrounding accretion disk, which would make the approaching gas appear bluer and brighter.

In reality, traveling so close to one of these beasts would be lethal. The movie shows a highly luminous accretion disk of gas, even though there’s no obvious source (such as a star) of accreting matter. High-energy X-rays from the disk would literally fry a spacecraft and its human inhabitants. Making matters worse, venturing so close to such a low-mass black hole would subject the crew to spaghettification (an actual scientific term!) as the hole’s extreme tidal force would literally stretch a person into an ultrathin strand of protoplasm.

The final part of the movie leaps even further into the realm of scientific implausibility, though I don’t want to spoil the ending. I loved the penultimate scene because of its surreal quality (vaguely reminiscent of the stargate sequence from 2001). Interstellar’s conclusion lays obvious groundwork for a sequel, but I still found it intellectually and emotionally satisfying.

I liked Interstellar enough that I will see it again. But it’s not for everyone, and I understand why reviews are mixed. There are no rock ‘em, sock ‘em battles with aliens. Those wanting to see depictions of alien planets lush with life akin to Avatar’s Pandora will be deeply disappointed. Like 2001, the movie leaves many important questions unanswered, which might turn off some viewers.

Despite some obvious parallels to 2001, Interstellar is a very different kind of movie. It’s much faster paced, more complex, and features many more characters, who are developed at a much deeper level. Interstellar is a highly original, thought-provoking, and convincingly acted movie about human relationships, especially the one between Cooper and his daughter Murph. There’s enough scientific content and accuracy to give it considerable appeal to people with a scientific orientation.

Although I found the movie to be a bit rushed and confusing at times, and I often had difficulty understanding the dialog, it had a deep affect on me, though I find it difficult to explain or encapsulate. None of the reviews I have read fully convey the essence of the movie. If you decide to see it in a theater, I advise you to leave your preconceptions at home, and to not let the scientific inaccuracies bother you.

See Kip Thorne's take on the science of Interstellar:

And watch three physicists discuss the science of Interstellar in a Q&A organized by the Kavli Foundation:

Think I’ll wait for Comet.
In that movie a geophysicist, played by Miley Cyrus, calculates that a 24 km comet, if it hit Earth, would provide enough water to restore Earth’s oceans, which have dried up and now cover only 30% of its surface. Except for a thin veneer of green around a few inland seas, Earth is one vast desert. A 28 km comet just happens to be on course for a near miss. The Good Guys plan to save Earth by altering the comet’s course, just enough to hit the planet. Of course, 99% of humanity will be wiped out in the process. But with planning, pockets will survive, and repopulate a planet restored to its former watery glory…for another 100 million years. Without the comet hitting Earth, there will be no immediate catastrophe, but life will surely wither away over the next 5 million years. Denialists try to thwart the plan, insisting that the drying is part of a natural cycle, and we should not play God, killing millions of people to make it inhabitable by billions in the future. I wont spoil the ending.

The best plain English Big Bang produced red shift is to increase electron rest mass from zero at infinite speed of light to proportionally less over time, so that matter is more compact with stronger chemical bonds today. This allows smaller and smaller brown dwarfs to become stars since the Big Bang. The Big Crunch is also a Big Rip by current black hole theory, 22 billion years from now. The 14.1 billion year half-life of Th-232-90 would be when the first supernovas began the Big Bang by forming acoustic holes in a pre-universe of 1800's ether where the muon is stable instead of the electron. Helium-6-2 in valence of naturally occurring nuclear molecules stabilizes Cm-250-96 by Pu-244-94, by U-238-92, byTh-232-90, by low density Ra-226-88, where valence muons appear as neutrons. Intelligent life in space uses nuclear reactor critical mass to ignore the speed of light by magic trick, the smaller the easier, and Venus is perfect for Heaven and Hell to 1800's theology. The 900 year half life of Cf-251-98, 9700 year Cm-250-96 made only by hydrogen bomb on Earth, and 351 year Cf-249-98, matches nicely 1000 years and 10,000 years of the Book of Revelation, and 400 years of the Book of Esdras 2. A blimp without cabin with cubic miles of Earth's atmosphere 35 miles up on Venus, could fit 144,000 souls with room to spare for mansions in the sky. Buddhist reincarnation is the fate of souls not so virtuous, with reincarnation as an evil alien that makes nightmare abductions on Earth, is a very traditional Hell. For this, do Star Trek Enterprise that has crew quarters that glow red from the heat, on the surface of Venus. A person who keeps his human form as for Jesus after death, is considered to be in Heaven, but dogs that morph to humans are at best in Purgatory. What an alien civilization would do with mankind, is use mankind for reincarnation-based afterlife punishment, where they get thrown out of the Garden of Eden. Space opera spaceships do not exist, as it is not necessary to leave a planet's atmosphere to ignore speed of light by critical mass. Closeness to Alpha Centauri, by aliens giving each other Adam and the Fallen Man afterlife punishment, may give rise to civilization on Earth.

It is 2 days that I am "fighting" to digest with "Laughlin's" !!! ..
Laughlin's, what's up with your genes!?!? ahahaha
The other one is selling Kanger Water in the name of Christ! ahahah

This society of celebrities make forget to people how it is so much better to understand things for themselves and to share them only for the love of science and knowledge and not for entertainment, direct son of entitlement.

Rich I do not absolutely want to stop you! please write more!! .. but you know it is entertainment not science, right?

Robert ! thank you for the article ! .. I saw the movie and agree with all your consideration.
And actually of course you gave me new hint. 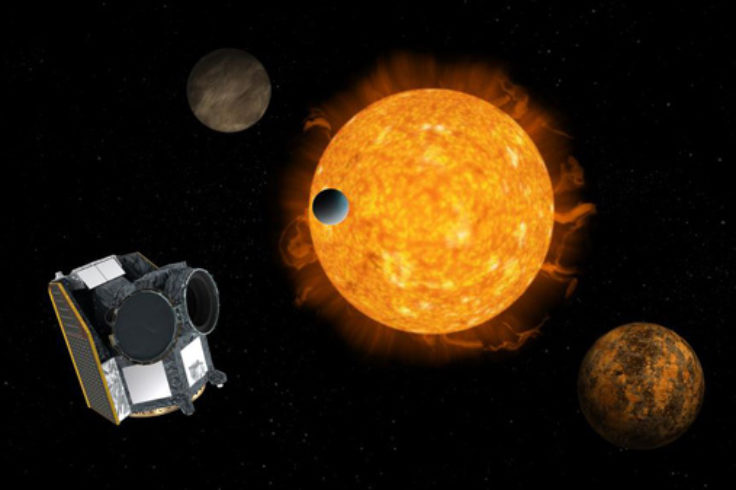 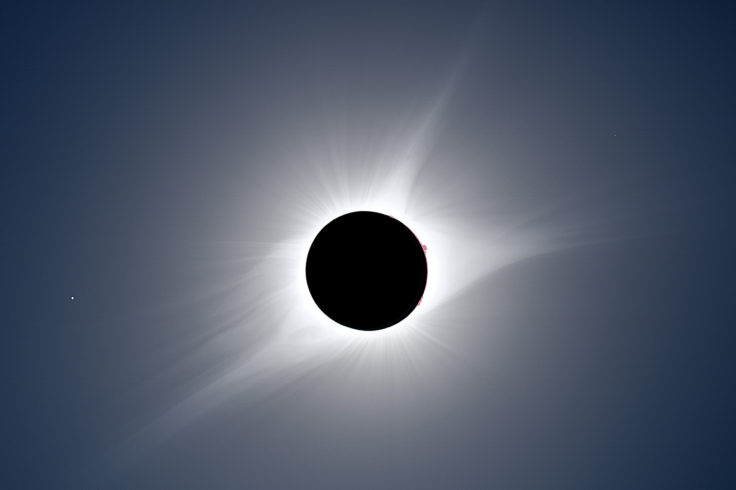 Where to Watch the July 2, 2019 Total Solar Eclipse Online