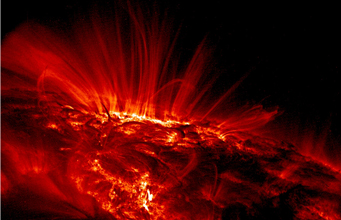 Scientists still wrestle with basic questions about our star, and none is more challenging than why its temperature soars from a hot 6,000 kelvins at the photosphere (visible surface) to a blazing 1,000,000 K atmosphere in the lower corona, across just 1,200 miles (2,000 km). NASA scientists hope that this newest solar sentinel — the Interface Region Imaging Spectrograph (IRIS), launched last Thursday, June 27th — will help unravel this and other solar mysteries.

You’d expect that the farther away you are from a heat source, the cooler it is. But something strange happens in the narrow band, dubbed the “interface region” by the mission’s scientists,between the chromosphere (at the bottom of the Sun’s atmosphere) and the transition region (sandwiched between the chromosphere and corona). This area emits most of the Sun’s ultraviolet radiation while the corona drives the solar wind, both of which impact Earth, so scientists are eager to find out where its energy comes from. 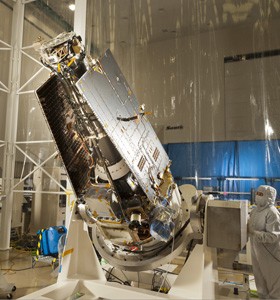 The IRIS satellite with its telescope and bus structure ready for testing.

Equipped with an 8-inch-aperture (0.2-m) ultraviolet telescope, the 403-pound (183-kg) IRIS spacecraft will stare at just 1% of the Sun’s surface, snapping one shot about every second to catch the fast-changing activity in the chromosphere. The physics in this region is so complex and dynamic (because the chromosphere hosts both hot and cold plasma) that, until recently, researchers couldn’t model or capture what was going on. But IRIS can tease out features as small as 150 miles (240 km) across and with record speed.

The most recent spacecraft tasked to study the interface was the Transition Region and Coronal Explorer (TRACE), which was retired in 2010. TRACE had a spatial resolution of 1 arcsecond, and its spectra sampled gas from 6,000 to 1,000,000 K. IRIS surpasses TRACE’s spatial resolution and covers a wider spectral range, from 4,500 to 10,000,000 K. The telescope aboard IRIS closely imitates the Atmospheric Imaging Assembly (AIA) aboard NASA’s Solar Dynamics Observatory (SDO) , which studies the Sun’s corona, but offers more detailed imaging. IRIS’s optics have been described as a “microscope to SDO’s telescope”.

“Improved resolution is like zooming in on Google maps. The value of the spatial resolution is that we think the energy transfer isn't happening on large scales,” explains Kelly Korreck (Harvard-Smithsonian Center for Astrophysics), but instead in small, finer structures. 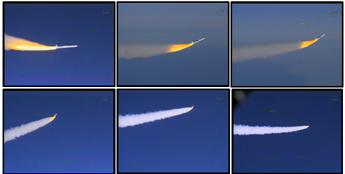 The IRIS satellite aboard the Pegasus XL rocket headed into north-south Earth orbit just after separation from the L-1011 carrier airplane.

The launch was scheduled for June 26th but got delayed due to a power outage in and around California's Vandenberg Air Force Base, where the control center is located. The following evening, at 7:27:44 p.m. Pacific Daylight Time on June 27th , IRIS rode to space aboard a Pegasus XL rocket that was fired off the California coast. Here’s a video showing the launch.

IRIS now circles Earth north-to-south (in a Sun-synchronous polar orbit) every 97 minutes at an average altitude of 400 miles (645 km). These next couple of months will be spent performing quality tests and calibrations to ensure all systems are “go,” and then the initial data from IRIS’s two-year-long study will become available to the scientific community.

Solar scientists now have a wide range of other spacecraft to keep tabs on the Sun and its effects on Earth. These include:

Thanks Peter. As far as I know, there isn't another spacecraft called IRIS. There is a seismology institute with the same acronym, and I think there's even astrosoftware called IRIS, but I don't think there's another IRIS spacecraft.

Peter... wow, you win a prize! in 1968, the Europeans built the International Radiation Investigation Satellite (IRIS), aslso known as ESRO 2B, which was launched from Vandenberg AFB. there was a NASA space observatory in the 1980s called IRAS (Infrared Astronomical Satellite). also, the Voyagers and Mariner 9 all carried an Infrared Interferometer Spectrometer (IRIS).and finally the Italians built a orbit-insertion rocket, used during the Space Shuttle program, called Italian Research Interim Stage (IRIS).

Why doesn't NASA save the money and read The Electric Universe. The "mystery" is already solved.

Ed wrote: "Why doesn't NASA save the money and read The Electric Universe. The "mystery" is already solved." Because, spinning it in the most generous way, the "Electric Universe" is an unconvincing, speculative, and amateurish theory that does not in any meaningful way "solve" the mysteries that it claims to solve. Less generously, it's a well-known crackpot theory --pseudo-science junk.

The requirements of the non-electrical models of modern cosmology have led to such arcane inventions as: "curved space", "neutron stars", "weakly interacting massive particles (WIMPS)", "massive compact halo objects (MACHOs)", several different sizes of "black holes", "superluminal jets", "dark energy", "strange matter", and magnetic field "lines" that ".
tangle-up, merge, open and reconnect".
We continually hear about "discoveries" such as:
"There is a black hole at the center of that galaxy." (Otherwise we cannot explain its level of energy output.)
"There is invisible dark matter in that galaxy." (Otherwise we cannot explain how it rotates the way it does.)
"Ninety six percent of the universe is made up of dark energy and dark matter that we cannot see." (Otherwise clusters of galaxies would fly apart because gravity alone can't hold them together.)
"Pulsars are made up of strange matter." (Otherwise we can't explain their oscillator-like behavior.)

From The Electric Sky by Donald E. Scott

Thanks, Kelly. I think I was thinking of the middle two.

I stand corrected, I wasn't aware of these other missions. Thanks Peter!