A four-decade-old Mercury mystery is now closer to being solved, but new questions have emerged in its place. In a September 29th press conference, NASA announced that its Messenger (MErcury Surface, Space Environment, GEochemistry, and Ranging) spacecraft had detected unusual depressions on Mercury's surface.

Images of Sander, a 47-km-diameter crater, obtained by Messenger during its first flyby. Deposits of unusually bright material can be seen on the crater floor. The enhanced-color locator image emphasizes the high reflectance and relatively blue color of Sander's crater floor deposits.

Clustered together in impact craters and basins, the so-called hollows have "bright interiors and halos, and are found over a wide range of latitudes and longitudes," says David Blewett of Johns Hopkins University's Applied Physics Laboratory, lead author of the paper that appears in the latest issue of Science. These anomalous pits range in size from tens of meters in diameter to several kilometers. And they appear to be fresh, relatively young formations, suggesting that Mercury is more geologically active than previously thought.

The hollows were first seen by the Mariner 10 spacecraft in the early 1970s, though the craft's distance from the planet meant that it could only detect bright, bluish regions called "bright crater-floor deposits." 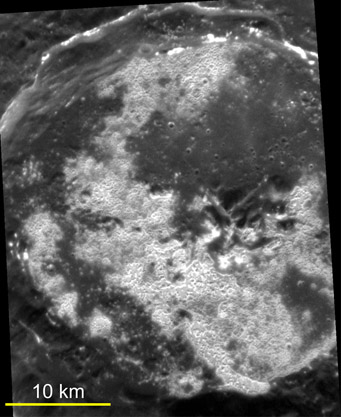 The high-resolution, targeted image of Sander crater reveals that the bright portions of the floor consist of large numbers of shallow irregular depressions ("hollows"), giving an etched appearance to the surface.

Now astronomers know that these deposits are composed of hollows, but how did they form? Blewett and his coauthors have some ideas. It's possible that the hollows were created by the movement of molten rock beneath Mercury's surface. As magma flowed out of subterranean chambers near the surface, the planet's rocky skin might have buckled and caved in. But volcanic activity rarely occurs on crater walls and rims — where the hollows are — and volcanic flows tend to have a reddish tinge, while the hollows generally appear bluish. So if the hollows were created by volcanic processes, the processes must be different than those we know.

It's also possible that the hollows were formed by small gas outbursts. Because the pits appear in or near impact craters, they might be linked to material brought to the surface from deeper down by each impact. Some part of the interior material might become unstable when it encounters the low pressures and high temperatures near the planet's surface, sublimating and causing a surface collapse. In fact, a similar process caused by the sublimation of CO2 ice produces the "Swiss-cheese terrain" near Mars's south pole.

But the Martian formations differ from the Mercurian hollows. "While the process forming the hollows may not be unique to Mercury, the hollows probably represent a unique expression of the processes — the composition of the planet's rocks combined with an intense environment combine to produce a landform that no one expected," says Blewett.

The conjectures don't stop there. Blewett and his group think the hollows could have arisen from space weathering — when a planet's rocky surface is worn away by the fierce solar wind and the combined impacts of very small meteorites. Or volcanoes might be responsible. A volcanic eruption during a Mercury night could shower the planet's surface with volatile compounds. A lava flow soon after could bury the compounds until a wayward meteorite slams into the surface, bringing the compounds to the surface and causing sublimation.

No matter the explanation, the presence of hollows supports the new thinking about how Mercury formed. Because Mercury has such a large iron core, many planetary scientists suspected that the planet once had a much thicker crust and mantle, but that these were either knocked off by a huge impact or boiled off by the Sun. But both processes would have eliminated the volatile compounds that astronomers now believe might have formed the hollows. "We need to look for other ways Mercury may have formed that explain both the large iron core and the volatile abundance," says Blewett.

This is a great discovery; and it has convinced me to throw out the last of my old astronomy books, as this was about the only fact about the solar system we haven't changed!
I was stumped by the author's description of the planet as "more geologically active than previously thought." Previously I thought we believed it was dead, not less active.

Is it possible that the planet Mercury is more aptly named than it is given credit for? Might not a huge deposit of mercury the metal appear from a distance the same way the hollows appear in the photos above in the article? Of course there are other factors to consider, but I’m just pondering.