Among the 320 solar physicists who have gathered for a conference in Las Cruces, New Mexico, word is buzzing about a claim that the 11-year solar-activity cycle, which some of them have spent their lives studying, may be on the verge of a drastic change. 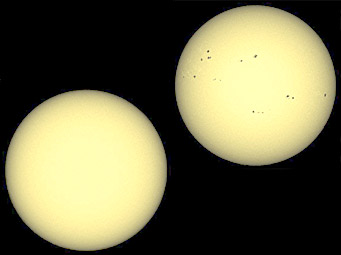 At the meeting of the American Astronomical Society's Solar Physics Division, four scientists affiliated with the National Solar Observatory have posted three papers showing separate evidence that the solar cycle may be about to flatten right out.

In a press conference Tuesday morning (June 14th) they predicted that the current solar Cycle 24, which began about three years ago, will produce only half as many spots as the previous one. And, said Frank Hill of the National Solar Observatory, Cycle 25 "may not actually happen."

Sunspots have fascinated astronomers and the public ever since Galileo and others discovered them in 1613. They proved to come and go in an 11-year cycle, and they later proved to be only the most visible indicator of the Sun's overall magnetic activity. This activity includes powerful solar flares and coronal mass ejections that bombard Earth and its environs with protons and gusts of solar wind — causing auroras, radiation spikes that can harm satellites, and magnetic turbulence that can wreck electric power systems.

The solar cycle is still full of mysteries. In particular, sunspots disappeared almost completely from about 1645 to 1715, an event known as the Maunder Minimum . Measurements of the carbon-14 that's created on Earth by cosmic rays (whose arrival is modulated by the Sun's magnetic field) show that the solar magnetic cycle did continue at a weak level even during the Maunder Minimum of sunspots.

The question on everyone's lips at the meeting was whether this could be starting to happen again. At the press conference, the researchers explained the three suspicious signs.

1. The Next Jet Stream Is Missing

Frank Hill uses a technique known as solar seismology, or helioseismology , to see what is going on deep inside the Sun. Hill has long noticed a slight variation from the general pattern of the Sun's rotation at a depth 7,000 km below the surface. This "torsional oscillation" shows up as matching east-west zonal currents, or "jet streams," in each hemisphere. Sunspots and other surface activity appear above the jet streams. The streams begin each solar cycle at high latitudes and move equatorward until the cycle ends, as illustrated below. 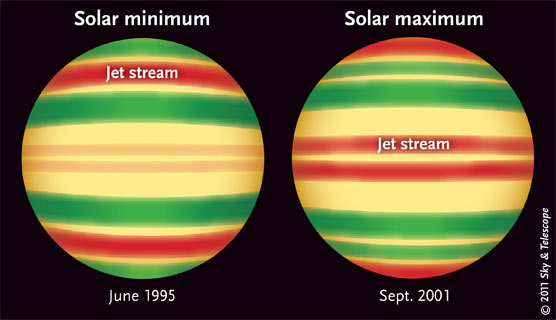 Deep “jet streams” some 7,000 km below the Sun”™s surface move from high latitudes (left) toward the equator as each solar cycle progresses. The streams (red) play an important role in generating the surface magnetic field; sunspots and active areas tend to emerge above them.

The streams themselves get going well before surface activity begins. Hill's data show that the streams for the recently-begun Cycle 24 first appeared (at high latitudes) all the way back in 1997, when the sunspots of Cycle 23 were still getting under way at lower latitudes.

Similarly, now that we're seeing spots of Cycle 24, solar seismologists should see the startup of the jet streams that will cause Cycle 25. But so far, there is no trace of them in either hemisphere, as shown in the data plot below (see the right-hand corners). They're three years overdue. 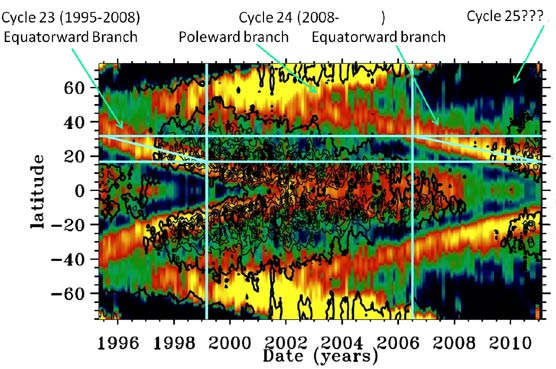 The observed latitudes of the deep jet streams (red and yellow) are plotted from year to year. New streams typically form at about 50Â° latitude (as happened in 1998 for Cycle 24), long before they cause sunspot outbreaks about a decade later. The new jet streams for Cycle 25 should have formed up in 2008 but haven”™t started even now; see the right-hand corners. Will Cycle 25 happen at all?

Moreover, the streams for Cycle 24 moved from high to low latitudes more slowly than those one cycle earlier. This slower movement exactly matched, and presumably explains, the surprising delay in the start of the cycle we are now seeing. Hill concludes that with the next high-latitude stream completely absent, the necessary precursors for a new cycle are missing and we may have no next cycle at all, or at least a greatly reduced one.

2. The "Rush to the Poles" Hasn't Happened

Richard Altrock, a civilian Air Force research scientist at the National Solar Observatory's Sacramento Peak Observatory, spoke next. He has long observed the solar corona, the Sun's extremely hot outermost atmosphere, which is shaped by magnetic-field loops rooted in the Sun's interior.

In the previous three solar cycles, the corona at high latitudes has performed what Altrock calls a "rush to the poles" when each new jet stream has begun forming deep below it. But this time, the event failed to occur.

Normally this phenomenon wipes the Sun clean of the previous cycle's magnetic traces, allowing the north and south magnetic polarities on the solar surface to switch between each 11-year cycle, as has always happened. (Thus the real solar cycle is about 22 years long, not 11, since only after 22 years are the north and south magnetic poles back where they started). No one has modeled what the Sun will do if this cleanout fails to occur.

Lastly, Matthew Penn and William Livingston of the National Solar Observatory showed their measurements of the average magnetic fields in the umbras (dark centers) of sunspots since 1999. 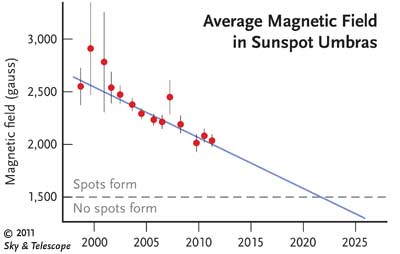 The average magnetic field strength in sunspot umbras has been steadily declining for more than a decade.

Penn and Livingston find that since about 2000, the average field strength has declined from 2,500 or 3,000 gauss to about 2,000 gauss now. They expected Cycle 24's spots to appear with rejuvenated field strength, but they didn't. The average magnetic field in the centers of sunspots has continued a more or less unbroken decline, as shown here.

Where the field is less than 1,500 gauss, spots do not appear at all. If the current trend keeps up the Sun would cross this line around 2022, after which its face would be blank.

If the coming solar maximum is weak and the next one is even weaker, a lot of people will heave a sigh of relief.

"Space weather" experts have been warning that satellites and the power grid are insufficiently hardened against major solar outbursts even as the world grows ever more dependent on high-tech infrastructure (Sky & Telescope, February issue cover story). The three new findings may mean we have less chance of losing crucial satellites or major parts of the power grid in the coming years.

Then there's the perennial question of whether solar activity affects Earth's climate. The Maunder Minimum corresponded to the "Little Ice Age" — a global cooling of about 0.2°C on average but as much as 1°C or more in unlucky parts of Europe (Sky & Telescope: March 2009, page 30). So, could a long-duration quiet Sun work against global warming, even if just a little?

Hill said that he is "an agnostic" on whether solar activity can influence temperatures on Earth. "I have not seen enough evidence to know either way," he said. "But if Cycle 25 does not occur, we will have a splendid opportunity to find that out."

Penn agreed that it would be an "excellent opportunity" for research. Altrock did not have an opinion on any possible climate effects, nor did Livingston.

Is this radical prediction premature? "They may be right," says David Hathaway of NASA's Marshall Space Flight Center. But he points out that we have only a few cycles or less of the data that the prediction is based upon, and the cycles before the last one were stronger than average. The record of umbral field strengths goes back only about a single cycle. "As for myself, I'm going to wait until we see more of Cycle 24."

Hill says he finds the evidence "very compelling." Penn says he looks forward to being able to "study the entry phase into" a Maunder Minimum event if that's what's coming. But he and others note that we don't yet know whether the first signs of Cycle 25 are simply being delayed.

In any case, astronomers will be watching the Sun's behavior now with a good deal more interest.

Jay Pasachoff is an astronomy professor and Sun specialist at Williams College in Williamstown, Massachusetts.