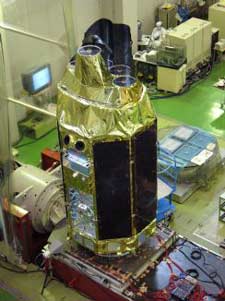 The Japanese X-ray observatory Suzaku (formerly known as Astro-E2) as it was being prepared for launch in late 2004. It lifted off successfully in July, but one month into the mission the craft lost all of its onboard helium coolant due to a leak.

Only a month after its launch, the Japanese/American Suzaku X-ray observatory (formerly known as Astro-E2), has lost the use of its flagship instrument. The X-ray Spectrometer (XRS),
the first high-energy calorimeter to fly in orbit, had been successfully cooled to 0.06° Kelvin (-273.09° C) on July 27th (JST), and demonstrated its expected high-resolution capabilities during onboard calibration tests. But before it could obtain its first glimpse of the sky, all of the instrument's helium coolant boiled away on August 8th due to a leak in its multi-stage cooling system.

Losing the XRS represents a severe blow to X-ray astronomy. The calorimeter was first planned to fly on the mission that eventually became the Chandra X-ray Observatory, but it split off in the early 1990s to fly on a different X-ray telescope that was soon cancelled. After that, the XRS was added to the Japanese Astro-E mission, which failed to reach orbit in 2000. Suzaku is Astro-E's replacement mission.

Meanwhile, Suzaku's other instruments, four CCD imagers and a hard X-ray detector, continue to work well. But it was the XRS that would have made Suzaku a world-class mission.