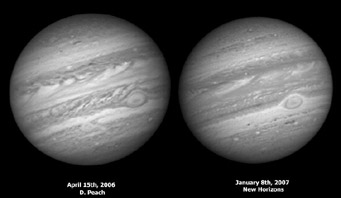 Solar system photographer Damian Peach of the United Kingdom noticed major changes in the South Equatorial Belt (SEB) when comparing images he captured in April 2006 to those recorded by NASA's New Horizons LORRI camera as the probe nears Jupiter.

Early morning observers are in for a treat when they point their scopes toward Jupiter. For the first time in at least a decade the visual appearance of familiar cloud bands within Jupiter's atmosphere seems to be undergoing major changes.

The first hints came when NASA's Pluto-bound spacecraft, New Horizons, pointed its long-range camera at the gas giant as the spacecraft approached Jupiter for a gravity assist.

Planetary photographer Damian Peach compared New Horizons images to photographs he captured approximately nine months ago. "Dramatic changes in the South Equatorial Belt (SEB) have occurred since last April. The Great Red Spot looks smaller and isolated now, and the South Tropical Band has vanished. Also note how much more dusky the Equatorial Zone has become. Perhaps a new SEB fade/revival cycle is about to begin. The present appearance looks very similar to the last occurrence that began during 1988," notes Peach.

So set your alarm early to catch a glimpse of this Jovian metamorphosis while it lasts! Jupiter is currently located in southern Ophiuchus and is highest before dawn. To follow the Red Spot from your home, see our Red Spot Tracker.