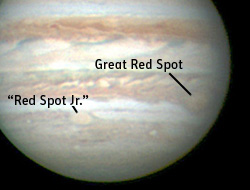 Both the Great Red Spot and the new 'Red Spot Junior' (the formerly white oval known as BA) are recorded in this exquisite webcam image taken by Christopher Go on February 27, 2006, at 19:37 UT. North is up. Click on the image to view a larger version.

There's a strange event brewing on Jupiter. The long-enduring, much-observed "white oval" on Jupiter designated BA has been reddening, and now its color is almost identical to the famous Great Red Spot. The oval lies in the South Temperate Belt. It follows the Great Red Spot by about 1 hour of Jupiter's rotation.

The new red spot, affectionately dubbed "Red Junior" or "Red Spot Junior" by some astronomers, is nearly half the size of the Great Red Spot, which means it has about the same diameter as Earth. It can be seen in telescopes with apertures 10 inches or larger.

The color change was discovered on February 24, 2006, by Philippine-based planetary imager Christopher Go, who sent out an alert through the Jupiter Section of the Association of Lunar and Planetary Observers (ALPO). The next day, Jupiter Section head Richard Schumde went through the ALPO Japan archives; he found that the oval started to appear brown in December and that the reddening began in early February. Many other amateur observers and imagers with ALPO are now tracking and recording the spot.

As amateurs enjoy Jupiter's new countenance, professionals are trying to understand why the spot turned red. When the white ovals BE and FA merged in March 2000 to form Oval BA, the new storm remained pale despite the turbulence of the collision. Now, without any new apparent merger, the color changed though the size of the storm appears unchanged. "Something very interesting is going on here," says Amy Simon-Miller (NASA/Goddard Space Flight Center). "It would seem the internal dynamics of the storm have changed. Why, we don't know."

By watching the formation of this new red storm, astronomers may gain precious insight into the Great Red Spot. Despite the fact that astronomers have observed the Spot since the 1600s, they know little about it other than its size (twice the diameter of Earth), wind speed (maximum 435 kilometers per hour, or 270 mph), and altitude (it pokes about 8 km above Jupiter's cloud tops). The storm was discovered as soon as telescopes were good enough to resolve it, so nobody knows how long it has been raging. Its energy source remains unknown. In fact, astronomers have not even conclusively identified the chemicals responsible for its red color, though they probably involve trace amounts of sulfur, phosphorus, and hydrocarbons.

One leading theory is that ascending currents within the Great Red Spot dredge material up from deep down, and that certain chemicals turn red when exposed to solar ultraviolet radiation. White ovals also protrude above the cloud tops, so the fact this storm is reddening could signify a strengthening of the storm. "From a meteorology point of view, these long-term changes can be viewed as climate change on Jupiter," says Adam Showman (University of Arizona).

Simon-Miller is applying for Hubble Space Telescope time to learn more about what's going on with Red Junior. She does not expect the new storm to grow substantially in size, since it's bounded by jet streams in the same manner as the Great Red Spot. "Whether or not it will stay red remains to be seen," she says. "I think this may tell us something about internal energies and dynamics."

"It will be interesting to see whether the white oval's new red coloration will be permanent," adds Showman. "Perhaps we will have to change its name to 'Red Oval'!"

For a list of all times when the Great Red Spot crosses Jupiter's central meridian as seen from Earth, see our Red Spot calculator. Add an hour to get the approximate transit times of Red Spot Jr.