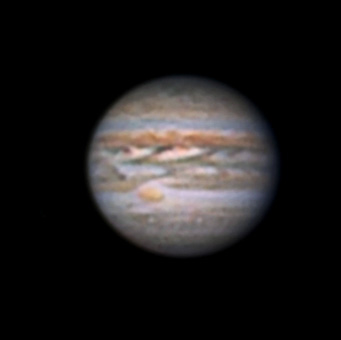 Although this year Jupiter is low for observers at mid-northern latitudes, the King of Planets can still display a wealth of detail at the eyepiece.
This image was recorded early morning April 8 by Sky

Times, they are a-changin' on Jupiter. The planet is now shining in fine view in the southern sky before dawn, and as first noted earlier this year by amateurs around the globe, Jupiter's familiar dark cloud belts and bright zones are in the midst of a facelift. John Rogers, director of the British Astronomical Association's Jupiter Section, reports that several different latitudes on the planet are showing rapidly developing phenomena.

The new white spots noted on March 29th by Zac Pujic have now spread out within the North Tropical Zone (NTrZ) and the North Temperate Belt (NTeB), disturbing a long swath of the thin, almost invisible NTeB. These spots are bright at all wavelengths from ultraviolet to near-infrared, implying that their cloud tops extend to a high altitude.

The Equatorial Zone (EZ) continues to appear much darker and more turbulent than in previous years, displaying enormous, dramatic plumes and an unusually large, dark Equatorial Band along its center.

The Great Red Spot (GRS) is relatively strongly colored and resides in the newly re-formed Red Spot Hollow — which outlines the famous storm in white, helping to make it appear more prominent than any time in the last decade. If your scope has never shown the Great Red Spot, try again now. (To find the times when the Red Spot will be on Jupiter's central meridian, use our handy Red Spot calculator.) 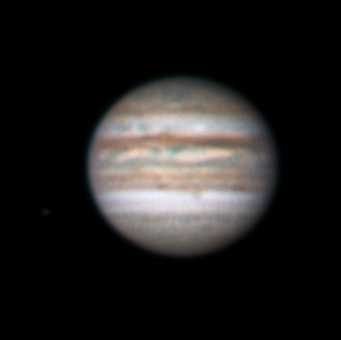 One of the new northern white spots appears in the upper right of this image, recorded with a 12.5-inch telescope and Lumenera webcam on the morning of April 11th. North is up.

Meanwhile in the planet's southern regions, Oval BA or "Red Spot Jr." (at the South Temperate Belt) shows no sign of dissipating or turning back to white. Right now a bridge of dark material crossing the South Tropical Zone seems to be interacting with BA, though this is most likely a chance appearance due to them currently being aligned.

Amateurs are encouraged to follow these developments whenever possible. Images may be uploaded to the image archive of the Association of Lunar and Planetary Observers (ALPO). Browse the archive to compare people's pictures to what you've observed!