The domes of the giant Keck I and Keck II telescopes atop Mauna Kea, Hawaii. The pair are spaced 85 meters (300 feet) apart.

Astronomers have used the two 10-meter Keck Telescopes in Hawaii together as a single unit to gain high-resolution data about a possible solar system being born 450 light-years away.

Like many newborn stars in the Taurus Dark Cloud, DG Tauri shows the infrared signs of having a protoplanetary disk of dust and gas around it. A collaboration of 63 researchers led by Rachel Akeson (Caltech) used the Keck Interferometer, as the combination of the two telescopes is called, to resolve the star's infrared profile. 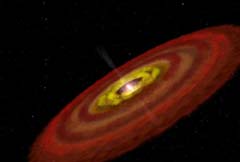 Artist's concept of the infrared-glowing disk around the young star DG Tauri.

If the astronomers' model is right, the star's hot dust disk has an inner edge 0.12 to 0.16 astronomical unit (20 to 25 million kilometers) from DG Tauri itself. The region closer to the star appears to be empty. The disk's inner edge is farther out than can be easily explained by the star's heat vaporizing the dust grains. Perhaps a planet has already formed near the star, or has migrated inward to there, and is sweeping the region clean. A research report will appear in Astrophysical Journal Letters.

This measurement represents a technological milestone. The engineers who designed the Keck Observatory have always had an ambitions goal: to align and merge individual light waves from the two telescopes, which are 85 meters apart, in order to gain the resolving power of a single telescope 85 meters wide — a technique known as interferometry. Despite the enormous difficulties, the Keck Interferometer has achieved success in many tests and observations since 2001 (Sky & Telescope: May issue, page 30).

For their interferometry observations, the Kecks also use another cutting-edge technology: adaptive optics, which cancels out the distortions of light waves due to atmospheric seeing (the tiny heat waves always shimmering in the Earth's atmosphere). Adaptive optics allow a large-telescope interferometer to measure objects typically 100 times (5 magnitudes) fainter than would otherwise be possible.

Members of the Keck interferometry team say the DG Tauri measurements, made last October and February, marked the first time adaptive optics and interferometry were used together for a science observation with giant telescopes. But this record won't stand for long. Keck is neck-and-neck in a giant-interferometry race with the European Southern Observatory's Very Large Telescope Interferometer (VLTI) in the Andes, which has been posting breakthrough results of its own — and is installing a brand-new adaptive-optics system designed for use during interferometry.

The VLTI is also exploring deep into the infrared spectrum. In June a team led by Andrea Richichi (European Southern Observatory) used two of the VLTI’s 8.2-meter reflectors together at the mid-infrared wavelength of 10 microns to resolve structure 0.03 arcsecond wide in the nucleus of the active galaxy M77 (NGC 1068), located 60 million light-years away in Cetus. The group plans more such observations later this year.