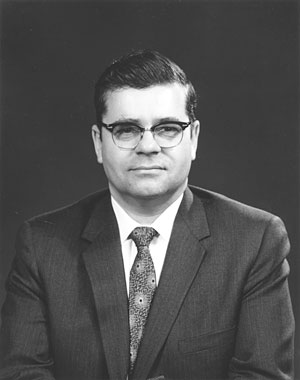 Astronomer Kenneth L. Franklin in 1972, during his heyday at the Hayden Planetarium in New York City.

On the first page of the November 1966 issue of Sky & Telescope, in comments about the upcoming Leonid meteor shower, Franklin stuck his neck out. Based on some calculations that he'd made, he said he felt we were going to be in for a "interesting display." His was one of the few forecasts that suggested the '66 Leonids might be memorable. As it turned out, he was right — that year observers experienced the now-legendary Leonid meteor storm.

Ken obtained his Ph.D. in astronomy in 1953 at the University of California, Berkeley. From 1954 to 1956 he was a research fellow in radio astronomy at the Department of Terrestrial Magnetism, Carnegie Institution of Washington, DC. While there, he and Bernard F. Burke discovered radio emissions from the planet Jupiter. They announced their find on April 6, 1955, at a meeting of the American Astronomical Society (AAS).

In 1956 Ken joined the staff of the American Museum-Hayden Planetarium, where he later served as chairman and chief scientist. Over the course of 30 years he wrote and/or presented innumerable sky shows for the planetarium sky theater, taught popular and technical courses in astronomy, and answered questions from the public. Ken was frequently consulted by local industries engaged in the space program, as well as by the news media and publishers. He was often interviewed on local and national radio and television, especially when a celestial event of special interest was due to occur.

From 1973 to 1979, Ken was the AAS's public-affairs officer. For two decades he also served in the society’s Harlow Shapley Visiting Lecturer Program, speaking at one or two colleges each year. Ken was an active member of many professional organizations and was elected a fellow of the American Association for the Advancement of Science, the Royal Astronomical Society, and the Explorers Club.

Ken served as astronomy editor of the World Almanac from 1970 to 1995, and from 1980 to 1992 he provided all of the astronomical calculations for the Farmer's Almanac through his association with the Hart Wright Company of Lewiston, Maine. He also contributed daily almanac information to the New York Times from 1975 to 1997 and launched that paper's weekly Sky Watch feature in the science section.

Asteroid number 2845 is named Franklinken in his honor.

Since 2004 Ken and his wife, Charlotte, have resided in Loveland, Colorado. In addition to Charlotte, Ken is survived by his daughters Kathleen Williams, Christine Redding, and Julie Jones.