Kepler observations have revealed several thousand potential planetary transits. The results are preliminary and need confirmation, but if they hold up they show Kepler's fulfilling its primary mission goals. 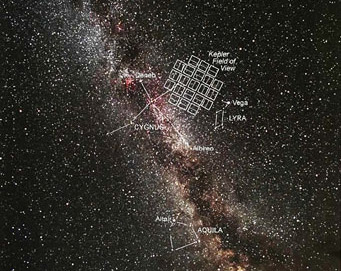 Kepler searches for habitable exoplanets in Cygnus and Lyra, roughly atop the galactic plane. The mission has discovered more than 2,000 exoplanet candidates, but new work might raise that number significantly.

Estimates of the galaxy’s exoplanet count are skyrocketing. I’m not talking about the 100-billion-planets idea touted last week (note: that hypothesis was based on observations of one star. Count ’em: one). I’m talking about NASA’s Kepler mission. While we were all gearing up for the holidays, Kepler researchers quietly released a mother lode of potential planet signals.

These signals don’t even qualify as “candidate planets” yet: they’re what are called threshold crossing events. Basically, these signals are periodic dips in starlight, obvious enough over the noise to merit further study, and have happened at least three times — the minimum Kepler standard. After carefully analyzing three years of observations, a NASA Ames team found 18,406 potential transiting planet signals of this type.

The periods range from 0.5 day to 525 days (the data’s upper limit), and many signals share the same star. Comparisons with known transit events in Kepler’s field of view suggest that more than 98% of the signals could be real transits, the authors suggest. (That seems exceptionally optimistic, especially given the most recent Kepler results.)

Of course caveats abound. One is that there’s a spike in detections with periods around 1-Earth-year long. That’s from a known hiccup caused by excess noise created as Kepler rotates. The Planetary Habitability Lab at the University of Puerto Rico at Arecibo took a crack at removing these false positives, and came up with a list of 15,847 signals.

The (almost certainly premature) graphic the PHL created is better than all the words I could spend describing it. (If it doesn’t appear below, click to see the Periodic Table of Exoplanets.) 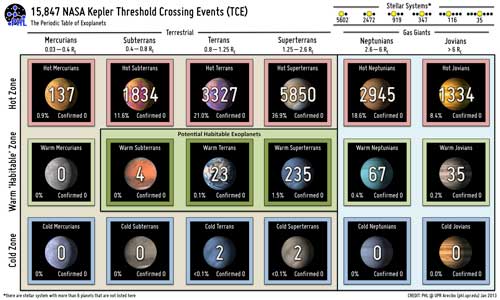 From this 15,000-plus list the team pulled 262 objects of interest that might be habitable worlds. They also speculated that an additional 20 potentially habitable exomoons could exist. (Exomoons are predicted for any planet estimated to have a radius larger than 10 Earth radii.)

What allowed this surge in Kepler signals? Two main contributions: one, the algorithms used to analyze the data are way better than they used to be; two, with three years under Kepler’s belt there are just a whole lot more observations to play with.

I stress that these results are preliminary. The signals will have to pass additional tests to rise to candidate status, and even more to be confirmed as real planets. A bunch could be bogus. And the PHL speculations should definitely be taken with a grain of salt. As I've noted before, we shouldn't be too quick to jump on the exoplanet bandwagon.

Additional exoplanet results are scheduled to be announced today at the American Astronomical Society meeting in Long Beach, and my colleague Monica will be sitting in to find out what’s afoot.

Meanwhile, read the PHL’s press release on the potential transits and the team’s detailed paper on the Kepler results.

I'm not sure, where this number comes from, but actually, Prof. Abel Méndez from the University of Puerto Rico at Arecibo states on Twitter https://mobile.twitter.com/ProfAbelMendez/status/287346722085163008 that the false positive rate is more like 50% for the Threshold Crossing Events.

I’d like to highlight Dieter’s last’s sentence from his excellent comment: “That doesn’t make the planetary statistics less remarkable.” To quantify his assessment on which I wholeheartedly agree, lets run the numbers; 2740 candidates by say 85% assurance plus 15,847 threshold crossers x 50%, using the conservative false positive rate would net a planet haul of around 10,252 worlds! That’s a whopping pile of planets ya’ll.

A Bright Flash in the (Lunar) Night