NASA's Kepler planet-hunting mission has spotted 2,326 likely worlds orbiting other stars, including a couple hundred about the size of Earth, and more are on the way. But moving them from the "likely" to the "confirmed" column is slow and difficult. 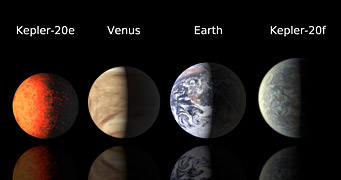 The sizes of Kepler-22e and f are compared to the sizes of Venus and Earth. The two new planets' actual appearances are unknown, but both are hot roasters close to their star.

That explains the apparent disconnect between Kepler deputy science-team leader Natalie Batalha mentioning almost casually, a couple weeks ago, that Kepler has found 207 Earth-size candidate planets (defined as no more than 1¼ times Earth’s diameter) — and the news that will be all over the world this afternoon that Kepler has just found the first two Earth-sized exoplanets ever.

Kepler science team members have said they expect 80% to 95% of their candidate objects to prove real. But they've set a high bar for confirmation. One way to cross it is to measure a candidate planet's mass, or at least find a planet-like upper limit to its mass. This usually means slow, protracted followup observations by a large ground-based telescope equipped with one of the world's few super-precision spectrographs capable of detecting tiny gravitational wobbles in a star's radial (line-of-site) velocity.

If a star is seen with more two or more apparent transiting objects, statistical analysis can rule out false alarms to a high degree of certainty. That's what was done in the case of the two new hot Earths. And sometimes two or more planets transiting a star can be weighed by their gravitational influences on each other, which show up as slight transit timing variations (TTVs).

This is from the press release that media received announcing the discovery, from the Harvard-Smithsonian Center for Astrophysics:

...The two planets, dubbed Kepler-20e and 20f, are the smallest planets found to date. They have diameters of 6,900 miles and 8,200 miles — 0.87 times Earth (slightly smaller than Venus) and 1.03 times Earth. These worlds are expected to have rocky compositions, so their masses should be less than 1.7 and 3 times Earth’s.

In addition to the two Earth-sized worlds, the Kepler-20 system contains three larger planets. All five have orbits closer than Mercury in our solar system.

“We were surprised to find this system of flip-flopping planets,” said co-author David Charbonneau of the CfA. “It’s very different than our solar system.”

The planets of Kepler-20 could not have formed in their current locations. Instead, they must have formed farther from their star and then migrated inward, probably through interactions with the disk of material from which they all formed. This allowed the worlds to maintain their regular spacing despite alternating sizes.

Kepler identifies “objects of interest” by looking for stars that dim slightly, which can occur when a planet crosses the star’s face. To confirm a transiting planet, astronomers look for the star to wobble as it is gravitationally tugged by its orbiting companion (a method known as radial velocity).

The radial velocity signal for planets weighing one to a few Earth masses is too small to detect with current technology. Therefore, other techniques must be used to validate that an object of interest is truly a planet.

A variety of situations could mimic the dimming from a transiting planet. For example, an eclipsing binary-star system whose light blends with the star Kepler-20 would create a similar signal. To rule out such imposters, the team simulated millions of possible scenarios with Blender – custom software developed by Fressin and Willie Torres of CfA. They concluded that the odds are strongly in favor of Kepler-20e and 20f being planets.

Dave Charbonneau of the discovery team stresses to us that this is indeed a Big Deal. He writes:

"1. These are honest-to-God Earth-sized planets! An Earth and a super-Earth (which might be 10 times more massive) might seem quite
similar when compared to a Jupiter. But to a planetary scientist there are enormous differences — such as the degree of tectonic activity, volcanism, the formation and retention of an ocean, the composition of the atmosphere, etc. For super-Earths we have to speculate, but for Earths we have some great points of reference (Venus and Earth).

"2. Using the transit method, small planets are hard to find. With this discovery, Kepler has proven it can find [confirmable] Earth-sized planets. These two worlds are not habitable, but Kepler can find such small planets, and in the next year we hope to push farther out from the stars to find habitable, Earth-sized worlds.

"3. The architecture of this system is nuts! Gas giants [Neptunes] and rocky planets are mixed together! In the solar system, the four gas giants and the four rocky worlds are neatly separated. This makes sense and essentially drives our understanding of planet formation. But in the Kepler-20 system, the two types of planets mingle, and I dare astronomers to explain that."

Here's the abstract of the researchers' paper.

Here's a summary article about it in Nature.

It will also be interesting to see how many tilted ringed planet candidates will be discovered in the lot. If one looks at how Saturn presents a very elliptical profile against the Sun (as seen from directions near Saturn's soltices), one could see how the light curve would contain a discrepancy between the slow ramping in and out of the transit and the transit time indicating the likely orbital velocity (considering the likely diameter of the host star) along with the curve depth. Such an elliptically-shaped silhouette would indicate either the planet is exceedingly oblate due to a fantastic rotation rate (unlikey but perhaps not totally impossible), or a relatively normal near-spherical planet surrounded by a substantial system of rings like that of Saturn. The OTHER possibility to watch for is that sufficiently large (including Earth-sized) moons attending planets could show up in Kepler data. However, both rings and moons are probably more likely to attend planets that ply relatively large orbits, so it could be awhile before those show.

Well we were told about hot jupiters now we have hot earths. This raises an interesting questions in origins science. Is our earth a cosmic accident or design? Consider Isaiah 45:18 vs. accident scenario. 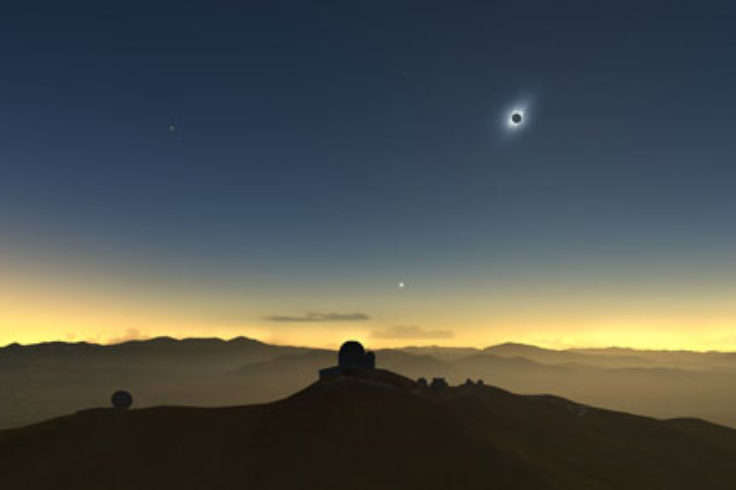 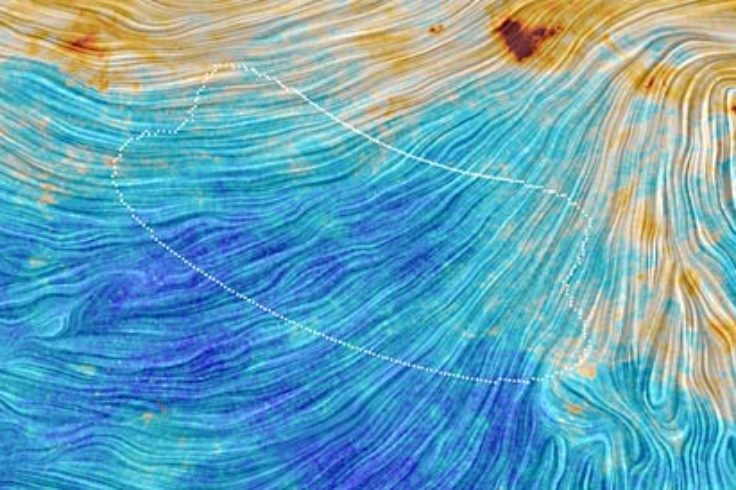