Astronomers on the science team for NASA’s Kepler mission announced at a press conference today what they're calling not only a milestone in the history of science, but in human history. Speaking at the American Astronomical Society meeting in Seattle on behalf of the Kepler team, Natalie Batalha (San Jose State University) announced what the group terms the first confirmed rocky planet outside the solar system. 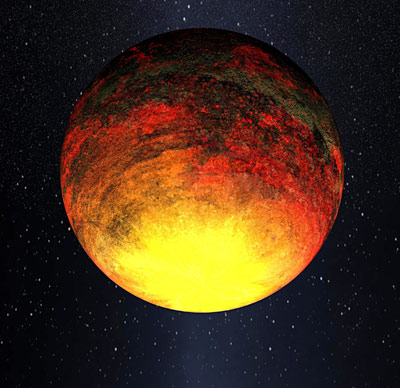 Kepler-10b orbits so close to its star that it must be tidally locked, with one side always facing the star and the other always facing away. If it has no atmosphere to distribute the heat around, the dayside should be heated to glow brilliantly and the night side should be dark, as in this artist's concept. In reality, the entire day hemisphere would be dazzlingly brilliant with the nearby star's reflected light.

The planet, named Kepler-10b, is only about 40% larger than Earth in diameter but has a hefty 4.6 times Earth's mass. Those numbers, which are known to fairly high precision, yield a whopping density: 8.8 grams per cubic centimeter, the density of an iron cannonball. By comparison, with an average of 5.5 grams per cc, Earth is the densest planet in the solar system (followed by Venus with 5.4 and Mercury with 5.3).

Kepler-10b’s ridiculously high density, even considering the expected compression of material in its interior, means that it must consist almost entirely of rock and metal with little or no atmosphere. The exact mix remains unknown. Due to gravitational compression and remaining uncertainties in the planet’s mass, the object could have a composition very similar to Earth, or it could have a significantly higher fraction of iron. Its surface gravity is about twice that of Earth, meaning you would weigh double your weight on Kepler-10b.

“The planet could be an iron world, born from mantle stripping by a giant impact. But the mass error bars are still large enough that the planet could in fact have an internal composition closer to Earth's,” says exoplanet researcher Sara Seager (MIT).

Kepler-10b whirls around its host star in only 20 hours, at an average distance 20 times closer to its star than Mercury orbits the Sun. The star. Kepler10, is a near-solar twin shining at 11th magnitude in Draco. It radiates about the same amount of energy as the Sun, so it must roast the planet’s dayside to a brightly glowing 2,500°F — hardly the place for any conceivable type of life.

The Kepler team saw signs of the planet transiting the star soon after the spacecraft launched in March 2009. The team noticed a periodic, slight dip in the star’s brightness every 20 hours as the planet passes in front of the star’s disk as seen from Earth. But it has taken nearly two years of ground-based follow-up observations of the star, involving dozens of astronomers, to reach the point where the team felt confident enough to announce the discovery. Key observations came from Geoff Marcy (University of California, Berkeley) and his colleagues at the Keck 10-meter telescope in Hawaii. They measured tiny Doppler shifts of the star as the planet circled it, proving the existence of the planet and securing its low mass.

In addition, the team got lucky. At 11th magnitude the star is one of the brighter ones under Kepler's watch, so the spacecraft has been able to track its brightness variations with such a high signal-to-noise ratio that the scientists could untangle the star's surface oscillations caused by pressure waves "ringing" throughout its interior. Such "stellar seismology" observations reveal a star's size, mass, and interior structure to high precision. In this case the team has pinned down the star’s diameter, mass, and luminosity to within 2 to 6 percent accuracy, thereby allowing a better characterization than usual of the planet’s own size and mass.

The Kepler team’s claim of discovering the "first" confirmed rocky planet outside the solar system is likely to raise the ire of scientists working on the French-led CoRoT mission — who nearly two years ago announced the discovery of a rocky planet with characteristics fairly similar to Kepler-10b. That was CoRoT-7b, the so-called "Planet from Hell" of Sky & Telescope's cover story for May 2009. The most current analysis of CoRoT-7b puts its mass at 6.9 plus or minus 1.4 earth masses. At today's press conference, Batalha pointed out that Kepler-10 is a more stable star than CoRoT-7, with less "noise" in its radial-velocity readings, and that this enabled Marcy and his colleagues to measure Kepler-10b's mass to higher precision.

Say CoRoT scientists Hans Deeg and Brandon Tingley: "The models of planetary compositions are still quite speculative at this point. Given the similarities between these two worlds, it's quite likely that in the end that they will turn out to be the same class of planet, whatever that may be. Neither of them are gas giants, that much is certain."

A Second Planet Too?

Batalha also showed Kepler data that offers very strong evidence for a second transiting planet in the system with an orbital period of 45 days. Marcy and his colleagues are currently taking Doppler data at Keck to prove the planetary origin of the 45-day signal and to pin down the object's mass, assuming that it exists. Marcy says he's almost certain that it's indeed another planet, and because the Keck team hasn’t been able to detect any Doppler shifts with this period yet, it must have less than 20 times the mass of Earth.

How Kepler-10b came to be so close to its star remains unknown. In all likelihood, the planet formed much farther out and migrated into its present orbit — probably during the system's infancy when the star still had a massive protoplanetary disk to cause such migration. The star is estimated to be 8 billion years old. During that time the planet’s original atmosphere may have been stripped away by stellar winds and magnetic interactions.

In fact, at the same press conference, Edward Guinan (Villanova University) presented strong evidence that the transiting hot Jupiter orbiting a different star, HD 189733, is interacting magnetically with its star to such a large extent that it has speeded up the star’s rotation at the expense of its own orbital energy. Such an interaction could be causing Kepler-10b to slowly spiral inward to its eventual doom.

Batalha concluded her presentation at the press conference by saying, “This is the first unquestionably rocky planet orbiting another star outside our solar system. This is an important milestone for our team and for humanity.” And with astronomers currently investigating many hundreds of additional Kepler planet candidates, most of which are probably smaller than Neptune, stay tuned for even more exciting discoveries in the months and years ahead.

“We have been discovering giant planets for 15 years but the ultimate goal is to find habitable worlds like Earth, with suitable conditions for life,” said Marcy at the press conference. “Kepler10b is a planetary missing link, a bridge between the gas giant planets we have been finding and finding twins of the Earth itself.”

I used GravitySimulator to see what would happen if the Sun's gas giants were given 10 Jupiter masses each. The sysem fell apart immediately. Like, 30 or 40 years into the simulation, the orbits were obviously (to the naked human eye) not circular. They all became extremely eccentric.

I think the effects of tidal heating had a lot to do with Kepler 10b and CoRoT 7b achieving such high density. This would provide heating beyond stellar. This type of density is no surprise to me.

Assuming metallicity of 1%, Kepler 10b needed to start out at 460 Earth masses, larger than Jupiter. I bet it lost some of the lighter metals, too, so was once even larger.

As exciting as Kepler's main mission is, the other facets of the mission are equally as important. We are learning not only about other Earths, but also about the majority of systems which are NOT like our own. The answer to Fermi's paradox is just around the corner.