Facing a standing-room-only crowd of reporters and astronomers at the American Astronomical Society meeting in Boston, members of NASA's Kepler science team described on Monday their cornucopia of findings that have been flooding across the field of extrasolar-planet science. 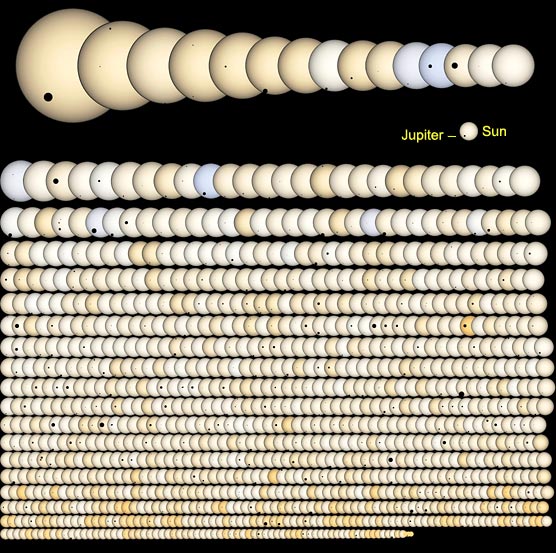 Jason Rowe's illustration of all 1,235 Kepler planet candidates and their stars, properly scaled and with the stars appropriately colored. Some 90% to 95% of Kepler's transit candidates are expected to prove real. A few of the largest transiting objects may be dwarf stars rather than planets. The Sun and Jupiter are shown for comparison.

But the media people who were hoping for a big new surprise or two were disappointed. The team presented no new Kepler data and only relatively modest new science findings. Everything was still based on only the first four months of the precision star-brightness measurements that the Kepler probe is making. This early data were released to the world in two batches in June 2010 and early last February.

The spacecraft, however, has now been up for 26 months, busily taking data almost all the while. Even so, Kepler lead scientist William Borucki said the next public data release regarding planets won't happen until June 2012, to groans from the audience. "We want to be certain that what we say is correct," he explained, and proper analysis takes time. The team's goal is never to have to retract a premature planet announcement.

And because the team's published papers are only allowed to draw upon public data that others can see and check, no new planet science using more than the first four months of data is likely to be published until then either.

The Kepler spokespeople did emphasize one aspect of their findings so far that hasn't had much publicity: the remarkable "flatness" of the many planetary systems that have been discovered to have more than one candidate transiting planet.

In our solar system, the major planets have orbits tilted as much as 7° from the plane of Earth's orbit. But in Kepler's multiplanet systems, the worlds discovered so far must lie within about 1° of the same plane — else we wouldn't see more than one of them transiting.

This tells us that quite a few planetary families were, like our solar system, spared the early epoch of wild orbital chaos that has left the planets of many stars in eccentric, looping paths or in orbits that are tilted every which way with respect to the star's equator. It's still early, but Geoffrey Marcy (University of California, Berkeley) estimates that a good 10% or 20% of planetary systems have remained basically round, flat, and orderly, more or less the way they must have formed. This is good news for the possible habitable alien Earths.

Much else that was discussed at the press conference we have already reported; see
Kepler Finds Planets in Tight Dance
Kepler's Outrageous Six-planet System
Kepler's Dense, Rock-and-Iron Planet
Kepler's Bonus: New Insights on Stars
Is Kepler Finding "Lite" White Dwarfs?
Two Exoplanets in an Interactive Dance
A Tidal Wave of Exoplanet Candidates
. . . and in more depth in Sky & Telescope.

Daniel Fabrycky (UC Santa Cruz) created an animation showing all the multi-planet systems discovered by Kepler so far. Hot to cool colors indicate the large to small planets relative to the other planets in each system.

Play at YouTube resolution or at higher resolutions. Here's a version that shows more clearly just the small systems.

One fact that hasn't been reported much is that even in its first four months, Kepler picked all the low-hanging fruit. The mission is scheduled to last 3½ years. In the rest of that time Borucki expects "hundreds" more candidate planets to be discovered, compared to the first flood of 1,235. The easy transiting planets in Kepler's field of view — the big ones in fast orbits — have all been found.

But even as the number of planet discoveries declines, the ones that happen will become more interesting! The new planets that show up with longer and longer data runs will form two classes:

1) Those in wider, slower orbits more like Earth's (which has a 365-day orbit and lies in the Sun's habitable zone of moderate temperatures); and

2) Smaller and smaller planets, presumably Earth-size and below, that require the light curves of many transits to be overlaid on top of each other to emerge from the noise.

Will Kepler continue working past its planned 3½ years? Borucki says the craft has enough attitude-adjustment fuel on board for 10 years, and if Kepler keeps functioning, he expects an extended mission to be approved.

A problem in later years, however, will be the slowing rate at which data can be returned. The craft, in an independent solar orbit, is gradually drifting farther away from Earth. This means that retreiving Kepler's transmissions will take more time (and expense) on NASA's Deep Space Network of giant dishes. To make the most of the antenna time, the team plans to stop monitoring some of the 156,000 stars that Kepler is watching — those that prove to be less interesting, if that can really be said of any star that's watched with such high precision.

A recent report covered Kepler-10 c. The data published indicates this is about 20 earth masses and the radii suggests a mean density 9.92 g cm^-3. It will be interesting to see how many of the 1235 exoplanet candidates turn out to have very high mean densities unlike gas giants.

It's interesting that the first batch of exoplanets discovered by the radial velocity method showed intense chaos, with tilted and eccentric orbits the norm rather than an exception. Now we see that there were indeed flat systems formed.

As a spinning gas & dust cloud collapses, random motion will eventually resolve into spin of the clould. Then the cloud collapses parallel to the axis of rotation. Friction within the gas then makes the whole thing rotate in a plane. So stellar systems ought to be planar.

Laplace published a book-length proof that the Solar system was stable but some graduate student found a mistake that invalidated the whole proof. Thus there IS no proof stellar systems are stable.

And indeed they're not. Now that we can see a range of stellar system sizes, we can determing observationally how much mass can be in planets and the system still be stable. I strongly suspect that our own Solar system is right at the edge of stability.

This is all going to get very interesting.